On November 8, at the British Olympic Association (BOA) Headquarters in central London, members of the Olympic family paid tribute to Dr. Don Anthony MBE, Olympian and founder of the English Volleyball Federation, who died earlier this year. Read latest volleyball news on Worldofvolley.com. 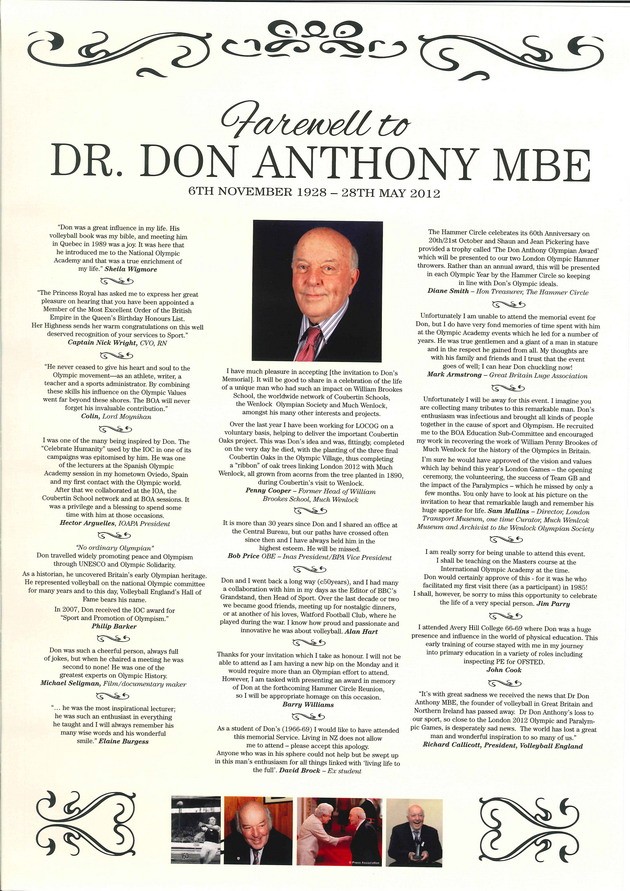 “This is the ultimate accolade that we at the BOA can present,” said Lord Moynihan. “Don was a great character who made an outstanding contribution to Olympism and he would have been immensely proud of many things during the Games this year, how sport inspired a country and left memories that all of us will savour for the rest of our lives.”

“His influence on the BOA was profound,” said long time BOA Secretary-General Dick Palmer, who worked closely with Don for over three decades. “Few educators have made a greater contribution than he did.”

Anthony represented Great Britain in the hammer at the 1956 Olympics and founded the English Volleyball Association, but his life’s work was as a pioneer of Olympic education. A prolific writer responsible for uncovering much of Britain’s Olympic heritage, he worked closely with UNESCO and was a driving force in the development of Olympic Solidarity. He taught physical education, most notably at Avery Hill College and Loughborough University. Well into his later years, he supported the introduction of the Coubertin Awards which focussed on sport and ethics with the International Pierre de Coubertin Committee.

The gathering at BOA Headquarters reflected his friends in many walks of life. These included de Coubertin’s great nephew Antoine de Navacelle and television commentator Paul Dickenson, a fellow member of the ‘Hammer Circle’ which has established an Olympic award in his honour.