In the first leg of the Playoffs 12 clash starring Poland’s and Italy’s national champions, Asseco Resovia RZESZOW was edged by Lube Banca Marche MACERATA in straight sets. This and other volleyball news read on Worldofvolley.com. 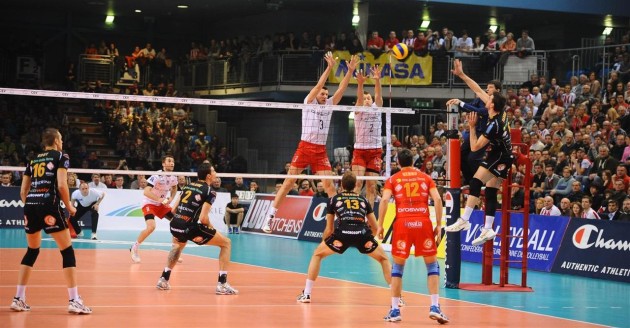 Thanks to this impressive away victory the guests from Italy can confidently look forward to the return game scheduled for next Wednesday in Macerata.

The hosts started the game very aggressively and rapidly went up 4:0 via good serving by their middle-blocker Wojciech Grzyb. MACERATA reduced the gap after a quick time-out asked by their head coach Alberto Giuliani (4:2) but the home side managed to maintain the lead (8:5, 16:13) via good efficiency in attack (especially by German opposite Jochen Schöps and middle-blocker Piotr Nowakowski). However, after the second technical time-out MACERATA started their chase (it was 16:17 after a great series of blocks on Asseco Resovia outside hitters). From that moment a hard-fought battle continued (21:21, 23:23) before the Italians cashed a set ball after a successful block on Paul Lotman. It was visible that at the end of this section the hosts had lost control of their service (they committed three mistakes in a row in this fundamental). The difference was also in blocking as the Italians registered 5 whereas Asseco Resovia had only one.

The plot in second set was quite similar to the previous one. The Polish champions started it impressively (they sailed to 11:7 after great counter-attacks by Nikola Kovacevic and Jochen Schöps) but the answer of the Italian standout was very quick (11:11 after three blocks in a row on Jochen Schöps). However, the home side was still leading by 3 points (16:13) at the second technical time-out after some mistakes committed by the guests. When Ivan Zaytsev was blocked by Wojciech Grzyb the hosts widened their lead even more (17:13). A few moments later Alberto Giuliani called a time-out and his players once again managed to react very positively (18:17 after a counter-attack of the very efficient Dick Kooy). After some misunderstanding between Lukas Tichacek and Wojciech Grzyb, MACERATA leveled the score (19:19) and once again the teams fought bravely down the final stretch (22:22). Asseco Resovia players had a first set-ball in their hands (24:23) but they missed the chance and in the end Ivan Zaytsev scored the last ball for the Italian team. Once again MACERATA played better in blocking and was more solid and cool in the most important moments of the game. The other problem of home side was the low efficiency in attack of their outside hitters – Paul Lotman and Nikola Kovacevic.

After losing two very tough ending of the sets, the hosts lost a bit their confidence and MACERATA took advantage from the start of the third set (10:13 after a counter-attack contributed by Simone Parodi). The Italians seemed to control the game (13:16 after the second technical time-out). Thanks to excellent serving by Marko Podrascanin and another mighty counter-attack contributed by Ivan Zaytsev MACERATA extended the lead up to 5 points (17:22) and even the supporters in a packed Podpromie sports hall (more than 4’500) were counting down the last moments of the game that was finished by another efficient block on Paul Lotman.

Although Asseco Resovia players were very determined to break their negative record in matches against Italian teams once again they had to swallow a bitter pill after a disappointing defeat in front of the home crowd. Best scorers of the games were Ivan Zaytsev (Lube Banca) and Jochen Schöps who registered 16 points for their respective teams.

“We feel very sorry for this defeat. We were longing for a victory. We started this game well, on a good level but unfortunately we lost the ends of the sets. It’s a shame that we couldn’t take our chances especially in front of our crowd. Nevertheless this is sport and we are going to Macerata with some optimism and fighting spirit” said Aleh Akhrem, the captain of the local team.

“We knew that Resovia is a very good team and that’s why we were preparing for this game very carefully. Although we were 4 or 5 points down in the first set we were improving our play and we managed to win a very close final rush. A similar situation followed in the second set. We are pleased with this result but we know that it’s not the end of the battle and we have to make another step in the return game in Macerata” stated Marko Podrascanin, Lube Banca Marche MACERATA middle-blocker.

“I’d like to concentrate on the first two sets which were crucial for the outcome of the game. We lost the endings of those sections due to our mistakes. It’s vital in Volleyball to be consistent and efficient especially in the decisive moments. The biggest difference between our teams was in the efficiency of our respective wing-spikers. Our efficiency from counter-attacks and high balls after a negative reception was too low” stressed Andrzej Kowal, mentor of the local team.

“First of all I would like to thank the audience for their incredible support. It was a big pleasure for us to play in Rzeszow in front of such a fantastic public. As far as the game is concerned I agree with the fact that the key to our success was the fact that we claimed the first two sets after very close final rushes. In the decisive moments we could count on our precise attack and a couple of important blocks” concluded Alberto Giuliani, head coach of Lube Banca Marche MACERATA.

BRA M: SESI tries to get back against Medley Campinas

POL M: Jastrzębski back in style after...