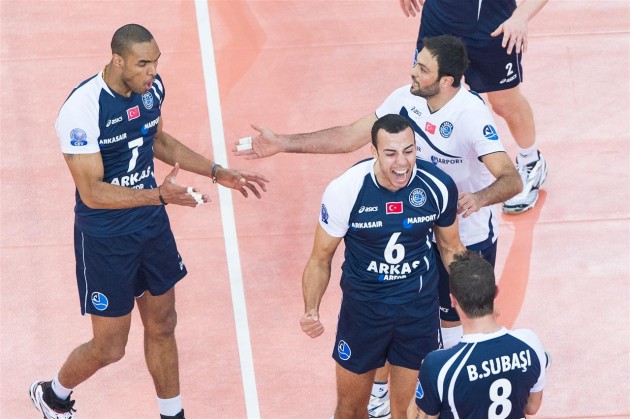 As a result of this dramatic marathon, the brave Turkish team advances to the Playoffs 6 to play there another Polish team, namely Zaksa KEDZIERZYN-KOZLE.
In the fifth set PGE Skra could not capitalize on a margin of four points (8:4) and did not manage to close the match despite 3 match points. In the golden set Liberman Agamez made the difference, serving two aces, when the score stood at 7:5 for PGE Skra. Thanks to his serves Arkas scored 4 consecutive points and took control of the battle in Atlas Arena.

The match, expected by many fans to be like a walk in the park, turned out to be extremely difficult for the hot favorites from Belchatow as 11’823 witnessed a great battle starring two strong teams. The Turkish league leader showed from the very beginning that the defeat in the first leg had not affected their team spirit. The guests won 5 out of the 7 opening points, which forced Jacek Nawrocki to ask for a first time-out. The block and defense of Arkas looked unbeatable in this section of the match, and some spectacular serves by Liberman Agamez (who killed 6 out of 11 attacks) also put their mark. Thus none was surprised when Jacek Nawrocki decided to substitute his setter and Dante Boninfante was replaced by Pawel Woicki. However, it did not help as an ace of Kevin Hansen moved the score to 10:18 and practically closed the first set.

The second act of this drama turned out to be a different story. After two blocks (including Pawel Woicki’s, the shortest player on the field, on Burutay Subasi), PGE Skra took the lead at 10:6 and control of that set. Another block of Pawel Woicki, which made the score move to 24:21, highlighted the final part of the set. Also Aleksandar Atanasijevic did a great job, improving from 22% in attack in the opening set (2/9) to 46% (6/11) in the second.

The rollercoaster for over 11’000 fans continued in the third set, which turned into a battle between Agamez and Wlazly. PGE Skra closed the gap from 15:20 to 21:22 but it was not enough to take the lead in the match. Arkas won the rivalry on the net, especially in blocking (5 vs. 2).

When the fourth set went quite easy to home team it was clear that PGE Skra needed at least one of the two possible tie-breaks to advance to the Playoffs 6 while Arkas had to win both the tie-break and the eventual golden set. The team from BELCHATOW dominated the scene from the beginning of the tie-break but allowed their opponents to close a 4-point gap, equalize (11:11), save 3 match points and win the set! This drama was hence to be concluded via the golden set. When it was 7:5 for Skra Liberman Agamez started to serve and his series ended after Michal Winiarski’s attack by the score of 7:9. PGE Skra did not manage to reduce this gap as Arkas controlled the game very confidently.

“We expected a difficult task and we were absolutely right. We knew Arkas would keep on fighting until the end. We had our problems with a lot of injuries, we did not have even the chance to practice with our complete line-up and we could see the effects today” stated PGE Skra mentor Jacek Nawrocki. “My boys left their hearts on the field but it was not enough”.

“We are very disappointed we are out. We did our best but Arkas destroyed our dreams. We will miss the Champions League very much. We lost only the first match in this year’s competition, but we are out”, added Mariusz Wlazly. The PGE Skra captain was the best scorer for his team scoring 20 points plus another two in the golden set.

Liberman Agamez turned out to be the best scorer of the match with 29 points from 55 attacks in the match. In the golden set he added 6 points to his tally, including two aces. “All the team did a perfect job. We built a perfect team spirit, and played clever, just like Glenn Hoag wanted us to do. PGE Skra also played good, looked for their chances, but we made less mistakes. This was a match that both sides could win. I am very happy, we have made it to the next round” stated the Colombian opposite of Arkas.

“In the first match in Izmir we did not play good, in Lodz we improved. I said to my assistant that this would be my third match in Atlas Arena and I finally wanted to win. My team did a perfect job, and I am proud of them”.

The fact that Arkas got the promotion to the next round means that there won’t be any Polish derby (i.e. PGE Skra against Zaksa KEDZIERZYN–KOZLE) in the Playoffs 6 of the 2013 CEV Volleyball Champions League, something many had already been waiting for in Europe’s Volleyball “Mecca”.

PHOTO OF THE DAY: Veljkovic aka Sheeva