On August 24, 2017 the Opening Ceremony and the opening match of EuroVolley Poland 2017 will be held at PGE National Stadium in Warsaw! 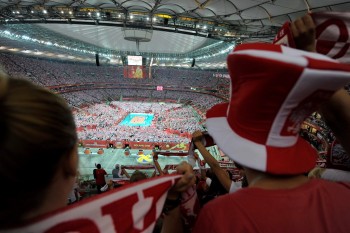 The stadium will become the arena of an elite Volleyball event for the second time in history. The first official match of an international volleyball championship tournament held at a football stadium took place on August 30, 2014 and was the Opening Match of the FIVB Volleyball Men’s World Championship Poland 2014.

According to the organizers, additional tribunes will be constructed, with a capacity of around 8,000. This might mean that another record of attendance will be broken, with even 70,000 fans able to see the match live inside the arena.

“I watched the World Championship Opening Ceremony and Match on television and I was really impressed with the event. It was an extraordinary show. I am now very fortunate to have the honor of taking part in such a ceremony, such a match. It is an excellent idea and promotion of volleyball,” said Ferdinando De Giorgi, the newly-appointed head coach of Poland.

POL M: De Giorgi about Leon – “To have him with us, we will have to go on vacation to Cuba”