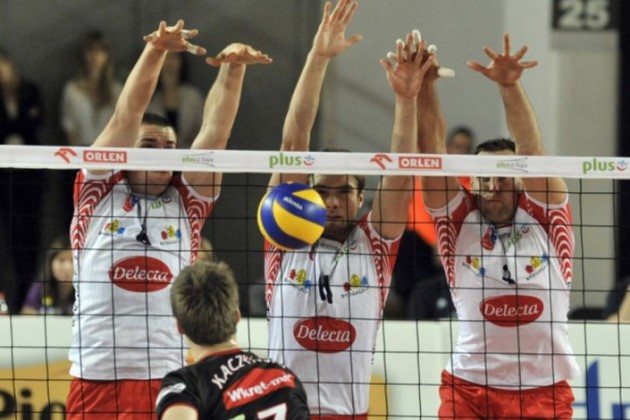 The Delecta Bydgoszcz players started the match better, thanks to efficient play of Michał Masny take the lead 8:5. The rest of the set CZESTOCHOWA have big problems with the adoption of servises and effective attack, at the second pause they were losing 10:16. Bydgoszcz concentration maintained to the end and won the set 25:17. The last point scored in the middle blocker Andrzej Wrona.

Another set both teams started the game equal. After the restart Delecta Bydgoszcz was better in every element of volleyball craft. In this situation, the coach Marek KARDOS started to make changes. Adrian Sziubowski and Jakub BIK appeared on the field. But nothing has changed Bydgoszcz advantage of every ball on the counterattack. Delecta ended set with a successful attack of David Konarski of the right wing 25:17.

Częstochowa third set began with a change in the composition – Mariusz Marcyniak replaced Srecko Lisinac. For a long time none of the teams have failed to develop a safe advantage. Just before the second break, white–Greens took the lead 16:14, due to a Marcyniak. The hosts maintained concentration to the end of a set and won 25:22.

The fourth set started better for Delecta Bydgoszcz. They took the lead 8:7, after the break, the conditions of the game began to dictate the guests. The CZESTOCHOWA players had big problems with the exit of a successful attack. At the second break, losing 16:11. However, Częstochowa not put down weapons. They managed to bring to the end where two points turned out the set, Bydgoszcz players made that points. The hero of the last two actions was the best player of the meeting – David Konarski.