On Tuesday Dinamo MOSCOW will play the four-time club world champions of TRENTINO Diatec for the first round of the Playoffs 12 in the 2013 CEV Volleyball Champions League. Only a couple of days before this stellar clash, Dinamo lost to Iskra ODINTSOVO 2:3. 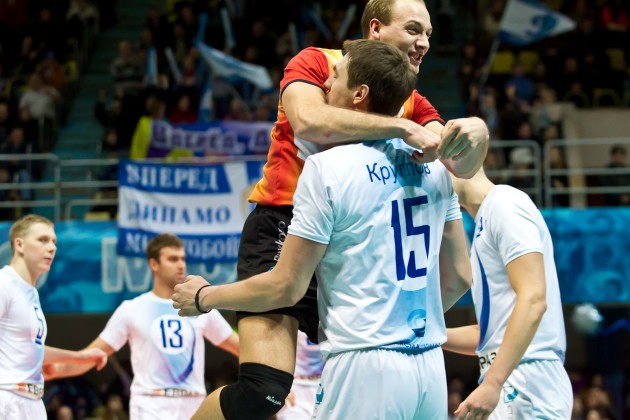 Only a couple of days before this stellar clash, Dinamo lost to Iskra ODINTSOVO 2:3 (25-21, 19-25, 19-25, 25-23, and 11-15) in the last round of the Russian Superleague as they could not find a way to stop the Canadian opposite of Iskra, Gavin Schmitt, who eventually top scored in the game with 31 points registering 64% of efficiency in attack. Pavel Kruglov responded for Dinamo with 24 (and 54%) but Bartosz Kurek – who was back after 3 months due to injury – could still not perform at his best and help his side cruise to a much needed victory. Because of injuries – that have affected also another wing-spiker, Peter Veres – Dinamo has almost never been able to line-up its best starting six and that defeat to Iskra eventually sent the side from Russia’s capital city to a disappointing fifth place in the standings of the so-called “red group”. However, 9 rounds are still left before completion of the regular season and Dinamo will have the time and the opportunity to bounce back.

Back to the Playoffs 12 of the CEV Volleyball Champions League, Dinamo needs to score a home win on Tuesday to keep alive their chances to advance to the next round. Some memories are still vivid as three years ago TRENTINO got to Moscow to edge the local heroes with the score of 3:1 in the prelims of that same competition. As TRENTINO is the four-time club world champion, the game has attracted the attention of many fans and journalists in Russia and shall be one of the absolute highlights of this week.

Questioned about the possibility for Kurek and Veres to play against TRENTINO, head coach Yuri Cherednik says: “Even though Bartosz has recovered from his injury and he’s been practicing with our group, it takes time for him to find the rhythm of the game after three months of absence from the court. Veres is recovering from his back injury and he’s feeling better and better. As soon as he is able to help the team, he will be back in action. As for TRENTINO, I will define my starting six shortly before the match. I can only say that we’ll be playing with glowing hearts to seize the night”.

POL M: Polish league leader Zaksa ready to test out the likes of Noliko in Playoffs 12

RUS M: She is the biggest support...