Russia stayed on top of Pool B in the FIVB World League on Saturday by picking up a 3-2 victory over Serbia. The top scorers were Pavlov Nikolay, who recorded 22 points for the home side, and Atanasijevic Aleksandar, who scored 15 points for the visiting team. 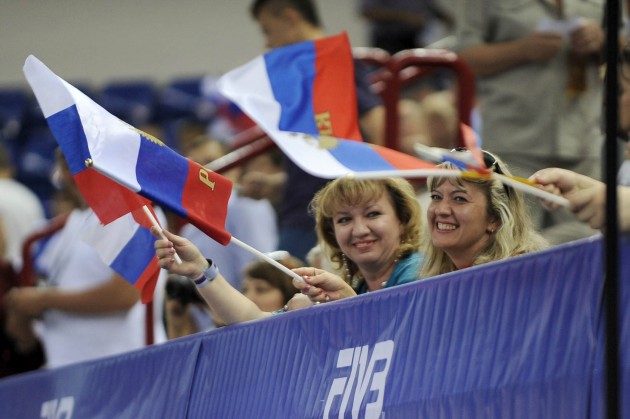 The match started closely with both teams playing well, until Russia found a three point advantage at 16-13 at the second technical time-out. Petric Nemanja from Serbia served three points in a row to nearly level the score, and his colleague Kovacevic Nikola successfully managed to do it at 21-21. However, Russia was never behind in this set, and Nikolay Pavlov closed it, 25-23.

Petric Nemanja and Atanasijevic Aleksandar both spiked excellently and helped Serbia take an early lead in the second set. Russia’s coach needed a time-out at 8-11 to improve his team’s rhythm. It seemed to make things even worse for the hosts, however, as powerful spikes by Kovacevic Nikola and Stankovic Dragan contributed another five points. Russia replaced players and cut the gap to 23-24, but Serbia successfully finished the set.

Russia still could not find their momentum in the beginning of the third set, as Serbia led 4-8 at the first time-out. Nikolay Pavlov and Ashchev Andrey continued to score more points, while the visitors kept attacking until the very end of the set.

Russia regrouped effectively and had a five point advantage early in the fourth set, holding control and forcing Serbia call a time-out at 13-7. Thanks to Alexey Spiridonov’s terrific spiking, Russia surged ahead and took the match to a tie-break.

Nikolay Pavlov and Alexey Spiridonov continued their brilliant attack to help Russia take a 10-4 lead, and brought the victory to Russia with the spectators cheering on their home team.

PANAC W: Brazil reaches semis with the U-20 unit