Four of the world’s top volleyball nations remain undefeated after the third week of the FIVB World league. After this weekend that elite group will be cut to three at the most. Olympic champions Russia go head to head with London 2012 bronze medallists Italy in a top-of-the-table clash in Siberia. After four wins in the opening two matches, both teams top Pool B with maximum points. 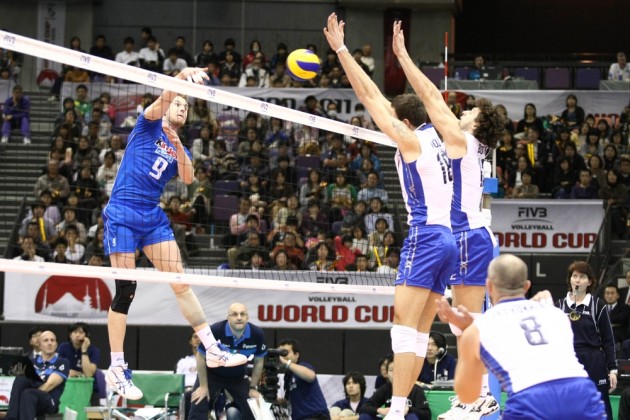 “On the back of this start, we feel ready to put our quality to the test against a top team like Russia,” said Italy’s Cristian Savani, captain of the eight-time World League winners. The matches will take place in Surgut, in western Siberia, on Friday and Saturday (both at 12:00 GMT). They mark the end of the sequence of home matches enjoyed by hosts Russia, who then face four away matches in the coming weeks before the Intercontinental Round reaches its conclusion.

With qualification for the Finals – which will be held in Mar del Plata, Argentina from July 17 to 21 – in mind, the Russians, who have won their last seven matches against Italy dating back to the 2008 World League, would ideally love to pick up two victories from the matches in Siberia. “The players are really enjoying playing together and are showing great desire to win. We are developing from game to game,” said Russia’s coach Andrey Voronkov. Last weekend produced a further two victories against Serbia, who themselves will be looking to keep their hopes of reaching the finals alive against World League debutants Iran. For Iran, the games in Teheran on Friday and Sunday will be their first home matches in the history of the World League.

The third duel in this group provides the two winless teams, Germany (two defeats) and Cuba (four defeats), with their very last theoretical chance to progress to the Finals. Making its 23rd appearance in the World League, last year’s bronze medallists have made their worst ever start to the competition. As such, Germany’s coach Vital Heynen is hoping his team can produce that illusive victory at home in Bremen: “If Cuba plays without Wilfredo Leon, then we definitely have a chance of beating them in front of our own fans.”

As in Pool B, two tickets for the Finals are also up for grabs in Pool A, and defending champions Poland are looking to launch a comeback. Having opened their campaign with two defeats at home to record World League winners Brazil, the Poles have their sights set on two victories against the French, who remain without a win to their name after four matches. “These are very important games for us. However, we have trained well and are on our way to hitting top form,” said Poland’s coach Andrea Anastasi, ahead of the matches in Toulouse and Rouen. Undefeated group leaders Brazil have a weekend off.

The fourth undefeated team in the World League Intercontinental Round, Bulgaria, is looking for wins number three and four. Their opponents in Sofia are Argentina, who travel to the Bulgarian capital as underdogs. The Gauchos, who as hosts are already qualified for the Finals, have just one win against USA to their name after four matches and are coming off two straight sets defeats to Brazil.

This weekend’s only match in Pool C pits two teams making their return to the World League against one another: the Netherlands and Portugal. The Oranges can regain the all-important number one spot in Pool C from Canada with two wins against the Portuguese. The Netherlands have one all three of the last three matches between the two teams dating back to 2009 including two 3-2 wins in the qualification tournament for this tournament. Only the winner of this pool will progress to the Finals of volleyball’s most prestigious annual international competition.

RUS M: Zenit-Kazan give another lesson to...