The MVP award of the FIVB Boys’ U19 World Championship have gone to Russian Pavel Pankov. 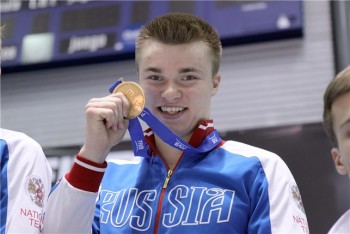 An accomplished setter with the finesse of a virtuoso, Pankov also demonstrated terrific powerful serves and the ability to attack when the occasion arose.

“He is the leader of our team” said his coach Alexander Karikov. “He learned how to play volleyball since he was a little kid of 4 years old because everyone in his family plays the game.”

“His father played, his mother was an Olympic gold medalists and his sister is the setter of the women’s national team,” Karikov added. “He is very smart young man with an overall ability for the game.”

The other members of the All-Star team were Argentina’s Matías Sánchez as setter, Brazil’s Rogerio Filho as libero, China’s Tang Chuanhang and Zhang Zhejia as outside hitter and middle blocker, Russia’s Maxim Troynin and Dmitry Volkov as middle blocker and outside hitter.

To read more about Pavel Pankov click on his WoV Community profile.