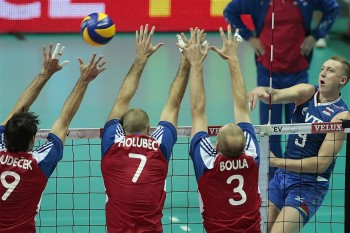 As expected, Russia have recovered from heavy defeat in first round, and smashed Czech guys in three sets. Only in first set, Czech gave stronger resistance while in another two struggled to score against Russia’s block.

Dmitry Muserskiy was the best scorer with 12 in Russia, while Nikolay Pavlov had 9. In Czech Republic, Tomas Siroky finished with 8 points.