On the eve of a strategically important volleyball match First Deputy Prime Minister of Omsk Region Yuriy Hamburg met with the players and the coaching staff of Russia’s Omichka OMSK REGION, who will face Turkey’s Eczacibasi VitrA ISTANBUL in the first leg of their Playoff 6 clash in the 2014 CEV DenizBank Volleyball Champions League - Women on Thursday. 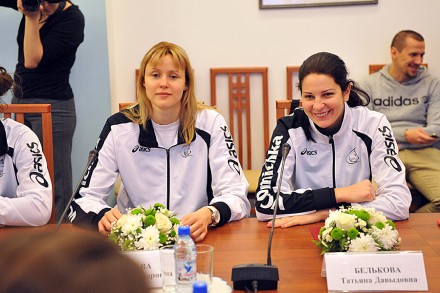 The Chairman of the Supervisory Board of the club thanked the players and the coaches for taking the Omsk team to this stage of the prestigious competition and for the brilliant games against some of the strongest European teams.  “We are looking at a team, who is a winner.  Experts believe that now Omichka boasts the best team in all the years of its history.  You are masters of the highest class.  We take pride in each of your victories. I hope that this will be the case on February 6.  It remains only to wish you good luck!  We will be cheering for you,” said Yuriy Hamburg.

Omichka head coach Zoran Terzic thanked the regional government for the supportive speech. “We do not want to shine for only a second. Our task: a club of the highest caliber for years to come,” he said.

Team captain Elena Yureva noted that the players realize: “The full responsibility of such a match, primarily, to the fans.” “We will play to win,” she said and handed Yuriy Hamburg a club uniform and a souvenir ball. The Chairman of the Supervisory Board of the club said that at one of the matches he had already been lucky to catch one of the balls that Omichka players traditionally toss at the fans before the games.

Difficult training session – This is how...