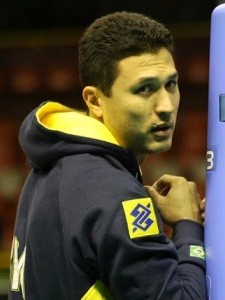 With the Brazilian national team, Marlon, has won the World League twice, and became the world champion in 2010. 22-year-old Conte, won the championship of South America in 2008 with the youth national team of Argentina.

“We have signed the Brazilian national team player, world champion, one of the best setters – Marlon. Brazilian squad is one of the strongest teams. I think that Marlon will help us to solve all the tasks in the new season“, said General Director of Dinamo Ruslan Olihver.

“Facundo Conte is, inspite of his age, already a famous volleyball player. I believe that today he is one of the most promising players in world volleyball. I think that he can be compared with our Maxim Mikhaylov. Despite the fact that these players act in different roles, Argentinian Conte, in comparison with Mikhaylov, has the same maximum load, and, despite his young age, is a true leader“, said team General Manager Ali Halilulin.