FIVB Hero Milagros Cabral is campaigning along with her teammates of the Dominican Republic National Team ahead of the first leg of the World Grand Prix to take place for the first time in her native soil from June 8 to 10. 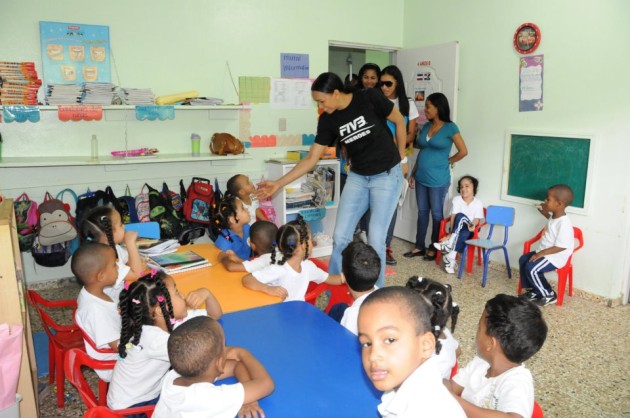 Cabral is seeking for fan support during the three-day event where top-world ranked USA, No. 8 Germany and No. 28 Chinese Taipei will be hosted by the Dominican Republic side currently ranked  9th in the FIVB rankings at the Volleyball Palace in Santo Domingo.

As part of her role as FIVB Hero, the veteran Cabral has been touring schools and sport clubs and invited her teammates to join her while promoting  the event and to help the expansion of volleyball throughout the country.

The captain of the home side, who was raised in the poor neighborhood of Cristo Rey located in the north part of the city, takes very seriously her role as one of the selected members of the FIVB campaign.

“I try to fulfill my responsibility in the Dominican Republic and also in the region of NORCECA”, Cabral says. “When I visit the children nursery homes, I always think about my origins and hope to be somehow an inspirational model for them.”

Cabral thinks the chance of hosting the FIVB World Grand Prix in Santo Domingo should serve as a launching pad to spread volleyball in the country.

“We have not played in our country since 2005 when the Pan American Cup was held here so it is very important the direct contact with the people”, she adds.

The qualification of the Dominican team to the next 2012 London Olympic Games, a feat achieved last month in Tijuana, Mexico, sparked a publicity boom and the players have become instant heroines. As captain of the National Team Cabral has been leading a media tour, visiting the most viewed local television shows and also the top radio programs.

“I am almost sure we are going to have full crowds during the next weekend and I feel very proud to help that purpose as FIVB Hero”, Cabral said.