Dinamo Moscow easily entered into semifinals of the Russian playoff after winning the second match of quarterfinal series, at home, against Guberniya Nizhny Novgorod – 3-0 (25:12, 25:21, 25:17). 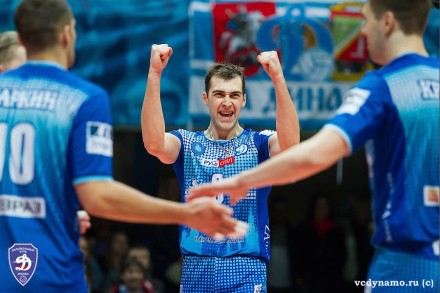 Dinamo started the first set quite successfully with a series of points from its captain Sergey Grankin – 5-2. The guests were able to normalize the reception and attack by the first technical break, but later they again had problems and again, in the reception. As a result, at the middle of the set, the advantage of Dinamo reached five points until the final 25-12.

The second set was the most equaled as Guberniya’s coach Plamen Konstantinov made some changes in his line-up. Dinamo went 3-4 poits ahead, but the guests reduced gap to a minimum mostly thanks to good blocking – 21-21. In decisive moments, Yuriy Berezhko took the role of a leader at the court while Pavel Kruglov blocked Alexey Kuleshov for 25-21.

In the third set, at the first technical time-out, Dinamo led by 8-7. The key breakthrough was at 12-9 for Dinamo, when Berezhko scored two tough balls and made a gap of five points for his team. Maxwell Holt won the last point in the match – 25-17.

The most productive player of the game was from the winning team – Kruglov, with 17 points.

Belogorie Belgorod became the last semifinalist. As it was expected, it defeated Kuzbass Kemerevo in the second match, also in straight sets.