Parmareggio Volley Modena made the race for the pole position in Serie A1 very complicated after the 3-1 loss against Top Volley Latina in the 23rd round.

Latina took off another important scalp in Italian championship after beating Cucine Lube Banca Marche Treia at the end of December, 2014. 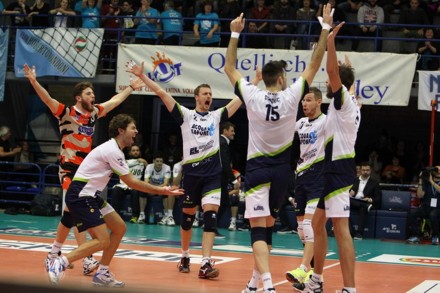 Saša Starović with 17 and Tine Urnaut with 15 points prevented Modena to maintain the gap to its closest pursuers on the table.

Modena had Earvin Ngapeth with 17 and Luca Vettori with 12 points.

After this round, the hopes of second placed Energy T.I. Diatec Trentino to reach first position had risen. It defeated Altotevere Città di Castello Sansepolcro in straight sets with 14 from Filippo Lanza.

Lube’s chances are also increased since now it has only three points behind Modena and two behind Trentino.

Lube noted win in derby versus Sir Safety Perugia with surprisingly 3-0 in away match. Serbian duo of middle blockers Marko Podraščanin – Dragan Stanković scored 10 points each for the winning team.