Dinamo KAZAN claimed on Tuesday a match against the local heroines of 2004 Tomis CONSTANTA in straight sets. The local side had evidently focused on the likes of world-class players such as Ekaterina Gamova, Maria Borisenko, Regina Moroz and Jordan Larson-Burbach. 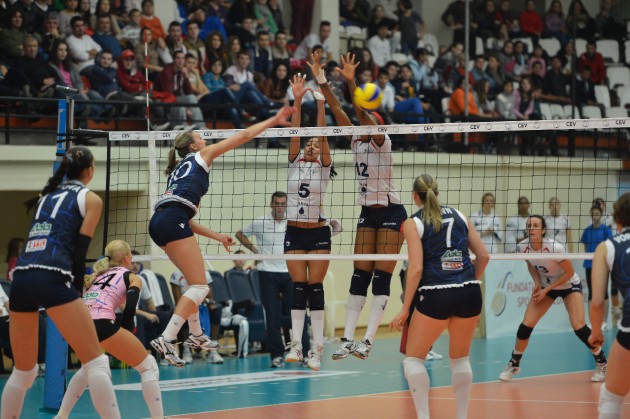 The local side had carefully prepared for this game hoping to stretch their amazing winning streak in the competition, and had evidently focused on the likes of world-class players such as Ekaterina Gamova, Maria Borisenko, Regina Moroz and Jordan Larson-Burbach. However, the guests really imposed their pace and quality right from the start of the match (8:4) and gradually stretched their lead (16:11) by exploiting some silly errors committed by Tomis in defense. Also libero Ekaterina Ulanova did a great job for Dinamo, supporting the offense line, and it was US American Jordan Larson-Burbach who blocked to seal the final 25-15 in the first set.

The plot did not change also in the early phases of the second set (5:2) and as the hosts could not score with the necessary consistency, Dinamo gradually opened the gap (8:6, 16:8) with Gamova on fire. With a terrific break as Heather Bown could serve for 11 times in a row, KAZAN was able to comfortably cruise to the final 25-12.

A similar scenario followed in set 3 where Dinamo quickly moved up 8:4 and 16:8, heading straight to a well-deserved 3:0 win (25-18) that the hosts were never able to question.

2004 Tomis CONSTANTA head coach Darko Zakoc was disappointed after the match: “It is just not about the evident difference that separates the teams in terms of quality and potential. My players were not in their best shape tonight and I think that if we had played with the same quality we showed two weeks ago with SCHWERINER SC, we would definitely have caused much more troubles to our opponents”.

CL M: ACH Volley seeks its chance in the matches against Euphony ASSE-LENNIK