Rabita BAKU downed on Tuesday the hosts of Atom Trefl SOPOT in straight sets at “Ergo Arena” in Gdansk. Marcello Abbondanza, and Jerzy Matlak spoke with the press after the game. 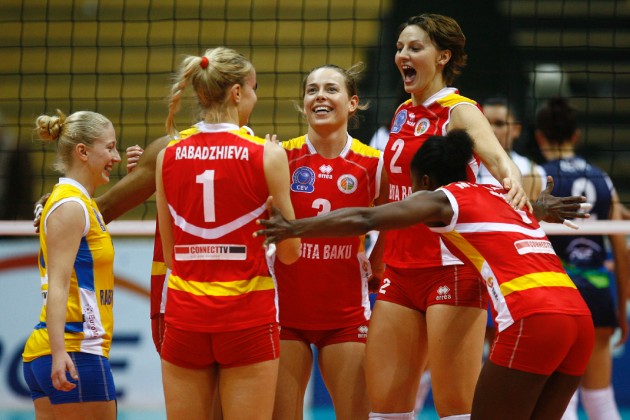 Rabita started out with a good pace (6:2) but via Rachel Rourke and Izabela Belcik, Atom Trefl could close the gap a bit by the first technical time-out (8:6). Local coach Jerzy Matlak called for his first time-out as the score stood at 12:8 for Rabita but some more blocks increased the Azeri lead to 6 points and as Rachel Rourke missed an attack, Rabita sealed the final 25-19.

Anna Podolec was included in the starting six for the second set and some good actions by Rachel Rourke paved the way for the provisional 5:1 in favor of the hosts. However, Rabita had flipped the charts already by the first technical time-out going up 8:7 before Podolec restored Atom lead (13:10). SOPOT moved ahead 17:13 helped by Erika Coimbra but some errors in defense helped Rabita return to the front and it was Madelaynne Montano that ended this section of the game at 25-22 for the guests.

Dorota Wilk and Erika Coimbra replaced Belcik and Klaudia Kaczorowska in set 3 but Rabita was quick in imposing its pace (7:2) as Atom was struggling in defense. A double substitution, with Belcik and Anita Kwiatkowska joining the match, restored the balance and good play by libero Mariola Zenik helped Atom stay in contention for that set that was nevertheless claimed by Rabita after a close final rush (27-25).

“I am satisfied with the result but we always have the same problems. We start well but suddenly stop playing, but could still bring it home in three sets” says Marcello Abbondanza, the head coach of Rabita.

“We did our best but our opponents had more options via their great roster. I am happy with the performance of Rachel Rourke, she did a great job also in defense tonight” stresses Jerzy Matlak.