Galatasaray YK get 3 points against IBB 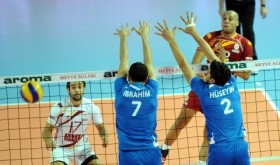 Derby match started with missing services of both sides as Galatasaray YK arrive to first break 8:7, then they rised up to 15:12 as new player Venezuelan opposite Kervin Pineura scored three service points, nevertheless IBB bounced back as the game tied at 18, then guest staff impressed the audience via fast middle attacks 21:22 where Cimbom called a time out, followed by another one 21:23, a strong block and net mistake declared the result 21:25.

Guest team set a pace 1:5 in second set, but a stop of Cimbom was useful to bring them back to life 7:8, seemed like IBB had had so many unforced errors, yellow red colored team consequently led at 18:17, Galatasaray’s Cuban player Salvador Hidalgo pushed the service to force rival used second time out 20:17. The staff with blue shirt could not prevent attack errors in remaining part, so Galatasaray YK saw the end 25:18. 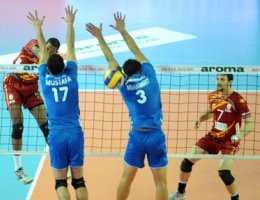 After leading first mandatory stop 6:8, IBB increased tempo up to 7:11 as Cimbom request a break. This break worked well, even guest staff arrived to second break 13:16, host scored 5 in a row to 18:16 as IBB stopped the game. From this moment, a tremendous struggle was seen on the court, although IBB acquired 21:23, host came back 23:23, Galatasaray took the chance at 25:24 and got it as a result of opponent error.

Galatasaray YK was like a thunder in fourth set 6:0, developed 16:8 in second tech time out, finally finished the game 3:1 by having last set 25:14.

Lucia Bosetti for WoV: “Vakif is one...

GP: Barbolini – “We improved our power”