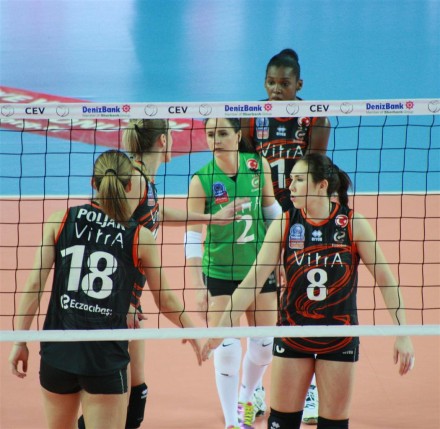 Swiss team made so many errors, especially in the first and third set, while on the other side, Eczacıbaşı’s payers punished almost every single one.

Thus, this result gives much more chances to the Turkish giants in the second leg.

Volero had fantastic start in fiery atmosphere in Istanbul. After 0-2 it was 2-6 with 4 points from excellent Olesia Rykhliuk.

Guests had outstanding reception in that period, but then Bethania De la Cruz stood on service line while Dobriana Rabadzhieva made several errors in a row for 4-0 run of Eczacıbaşı on 5-9 result (9-9).

After that, came period of point for point play until 13-13 with two suspicious referee’s decions on both sides. It’s interesting that Eczacıbaşı scored 7 out of those 13 points from rivals’ errors.

Volero went on the second technical time-out with two points advantage (14-16) and since it kept that lead, Giovanni Caprara had to call time-out on 16-18.

It was good decision from Eczacıbaşı‘s coach becauce his team made 5-1 run afterwards with Jordan Larson in the main role (21-19). It was home team’s first lead. Soon it was enlarged to 24-20. After quick attack and spike from Maja Poljak, Eczacıbaşı turned second set ball into 25-21 and 1-0 lead in sets.

Eczacıbaşı continued in the second set where it stopped in the previous. Volero had the lead, but for short (0-2 and 2-4) mostly thanks to Neslihan Demir’s deconcentration. But her ace announced Eczacıbaşı’s 5-0 run on 4-5 result (9-5).

The setter of the hosts Asuman Karakoyun included all teammates in the attack and besides Larson, De la Cruz and Christiane Fürst also started to score (12-7). As an example of Eczacıbaşı’s dominance, it made 8 errors by 19-13 result but still had advantage of six points.

Serve reception was major problem for Volero in the second set in addition to poor performances of its most important players – Rabadzhieva, Natalya Mammadova and Anna Kupriianova. For instance – Rabadzhieva scored her first point at 21-15!

Volero had to seek salvation in the third set and it found it in the first half. Rabadzhieva definitely ’woke up’, while Volero’s substitute, middle blocker Rachel Sánchez made the block of her team much stronger. It was 3-5 and 6-10.

But, De la Cruz began to win points like there was no one on the other side on the net and soon it was 10-10.

Sánchez became main option in Volero’s attack and Swiss team renewed advantage (13-15). Still, the guests just couldn’t keep it and after 15-15, an uncertain finish was on the horizon.

No team managed to gain lead larger than one point although both had their chances, but missed so many counter attacks.