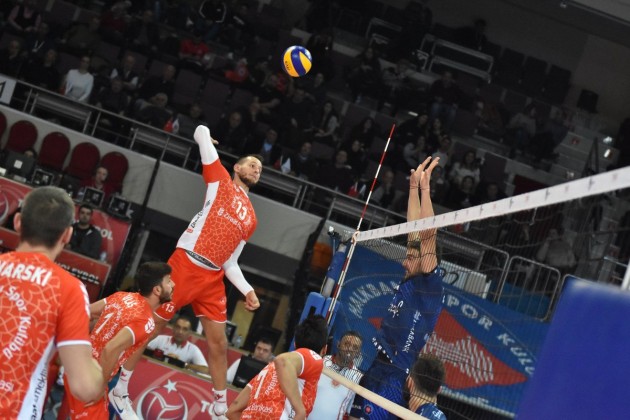 Many things went in favor of Ziraat in Round 11 (the last round of the first part of the regular season, and at the same time in 2017) derby against Halkbank. They played at home, the Pole superstar Bartosz Kurek was in the squad, taking part in the 2nd, 3rd and 4th set and scoring 3 points, and their rivals were deprived of the help of the best scorer so far, the Cuban opposite Fernando Hernández. He was replaced by the Bulgarian newcomer Velizar Chernokozhev, who debuted with 14 points (1 ace, 3 kill blocks), but with only 33% of the attack.

The Serbian Nemanja Petrić made 16 points for Halkbank while Cuban Raydel Hierrezuelo made as much as 4 kill blocks, which is impressive for a setter. In Ziraat, the Pole Dawid Konarski was on a high level, as usual, scoring 21 points. Koray Şahin surprisingly stood out in blocking with 5 kill blocks.

Ziraat remained the leaders with 10-1 and 28 points, Halkbank have 9-2 and 26 points. We are looking forward to seeing what will 2018 bring in terms of the title race in Turkey!

İstanbul Büyükşehir Belediyesi Spor Kulübü took advantage of yesterday’s defeat of Arkas Spor to go around them in the rankings. İstanbul BBSK defeated İnegöl Belediyesi, with 16 points from Baturalp Burak Güngör, to claim the spot No.3.

ITA M: That’s how defending champions do it – Lube break Perugia into pieces!

EXCLUSIVE: Mia Jerkov – “My future in...