Record international Ingrid Visser says she will no longer be available for the Dutch national team and will not be going to the Olympic qualifying tournament in May. 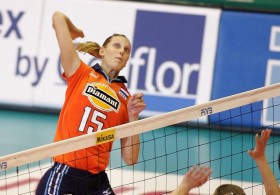 On Saturday, she sent out a press release that stated: “On January 30, the Dutch Volleyball Federation announced that I was no longer available for the Dutch team. Following the resignation of Avital Selinger, I hesitated to move forward with the project that he initiated.

“The pre-Olympic qualifying tournament in Croatia has not taken away my doubt; rather it has increased it. I do not have the necessary motivation and, as such, can no longer have value to the team. In the interest of myself and the team, I decided to end my international career with immediate effect.

Italy: Sora beaten. Up to third.