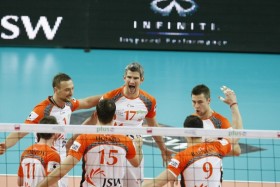 Indykpol AZS failed to win the match over Jastrzębski Węgiel, but the team of Tomaso Totolo played much better than in previous meetings.

At the end the fans of Indykpol AZS saw their team’s prowes .

Indykpol AZS began the duel well. After the block of Wojciech Ferens, Łukasz Kadziewicz, and Bartosz Krzyśk on Michał Kubiak, they led with 2-0.

The ace from service of Michał Kubiak evened the score to 2-2.

With the passing ball Kadziewicz attacked Łukasz. The players of Tomaso Totolo went to the first technical timeout after an attack by Bartosz Krzyśk, leading with 8:4.

The attacker of Indykpol AZS blocked Bartosz Gawryszewski. Gunia and Michał Kubiak scored directly. The attack of Wojciech Ferens gave the hosts the advantage of 15:12.

Effective was the counter attack of the player of of Jastrzębski, Vinhedo. In an unusual situation was the center Mariusz Gaca, who scored a point for the Olsztyn team, attacking from the right wing.

With the point of Ashlei Nemer, Indykpol AZS won the first set with 25:18.

Most of the second set was characterized by a struggle point by point. It started with a double block of guests on Wojciechu Ferensie. Bartosz Krzysiek pointed with an ace from service, leading the team of Indykpolem AZS to 2:1.

Two effective attacks on the block led Indykpol AZS Olsztyn to even with 3-3. The block on the Brazilian playmaker was done by Łukasz Kadziewicz and Wojciech Ferens. Bartosz Gawryszewski pointed with an ace from the service. Jastrzębski Węgiel led with 7:5.

From the center attacked Russell Holmes. Bartosz Krzysiek. Indykpol AZS took the lead with 11:10. Michał Kubiak evened the result to 12. After the attack of Luciano Bozko, the guests went to second technical timeout leading with 16:15.

Mateusz Malinowski won points for Jastrzębski . Rob Bontje and Michał Kubiak blocked Paweł Siezieniewski, which gave them an advantage of 21:19.

The set finished with the attack of the guests. The players of Lorenzo Bernardi won with 25:21.

The third set started successfully for Jastrzębski. After the attack, of Luciano Bozko, Jastrzębski led 3-2. Guillermo Hernan and Łukasz Kadziewicz blocked Michał Kubiak. From the center attacked Rob Bontje. Vinhedo pointed with the ace from service, the guest took the lead of four points, 9:5.

Michał Kubiak, Russell Holmes and Mateusz Matthew blocked Bartosz Krzyśk. The sixth point for the hosts won Paweł Siezieniewski. The ace of the attacker of Jastrzębski, gave the team an advantage of 18:8. Indykpolem AZS patiently began to make up for losses, reducing the difference to the rival. Dawid Gunia and Bartosz Krzysiek lined the block on Michał Kubiak.

Paweł Siezieniewski scored sixteenth pointfrom the attack for Indykpol AZS Olsztyn. The set was determined by Dawid Gunia’s sending the ball outside the court. Jastrzębski won with 25:20.

The first point in the fourth set won Wojciech Ferens, blocking Mateusz Malinowski. Two points attacking directly won Bartosz Krzysiek. Olsztyn led with 3-0. The successful attacks of Michał Kubiak have led to 7:7 and then to 9:7 for the guests.

After the ace from service of Dawid Gunia, Olsztyn “caught up” the enemy with the result of 9:9. The hosts took the led with 12:11 after the point won by Bartosz Krzysiek. Mateusz Malinowski pointed with an ace. Rob Bontje from the block stopped the attack of Wojciech Ferens, 16:16.

Dawid Gunia got points from center. Lorenzo Bernard  was concerned about the result 19:18 for Indykpol AZS Olsztyntack. The strong attack of Rob Bontje evened the result to 22.The error of Bartosz Krzysiek determined the fate of the set. Jastrzębski Węgiel won with  25:22.

BLOG: GERIC ANDRIJA – “THE BEST FROM THE BEST”