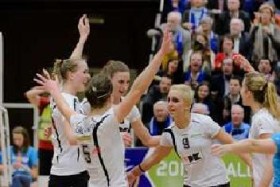 The next opponent for GENT will be Lokomotiv BAKU, a side that was recently joined by Belgian national player Hélène Rousseaux after she left Organika Budowlani LODZ citing financial reasons.

With some 1’000 fans in attendance, VDK GENT Dames opened by setting the pace in the first set (18:12) and even though Elies Goos went to serve for the set by the score of 24:12, still Impel Gwardia fought back with some excellent play provided by Monika Czypiruk.

However, this comeback was not completed as Els Vandesteene was able to seal the deal at 25-23.

The guests from Poland dominated the scene in the second set as Katarzyna Jaszewska scored 6 points all alone in this section of the game with the last point being contributed by Katarzyna Mroczkowska (19-25).

Monika Czypiruk got injured in set 3 and she was replaced by Bogumila Pyziolek; the home side opened the gap via the support of Lore Gillis (9:5, 18:8) with the final 25-13 being pocketed very quickly by the local heroines.

VDK GENT Dames started out pretty strong also in set 4 (7:4, 10:5) and even had three match balls as the score stood at 24:21; however, the guests reacted and played with a lot of courage to draw level via Jaszewska and Mroczkowska before Marta Haladyn did score the last couple of points to extend the game to the tie-break (25-27).

The score stood at 8:7 for GENT as teams changed sides there and the last break was clipped by Gillis, Marlies De Smet and Goos to fire up the celebrations of the Belgian fans (15-12).

Els Vandesteene and Katarzyna Mroczkowska finished the game on top of the charts of the best scorers with 21 points apiece.