In the highlight match of 19. day Vivo Minas lost in the first 2 sets, but exceded in tiebreak. Sada Cruzeiro lost the championship lead and slided into 2. place. 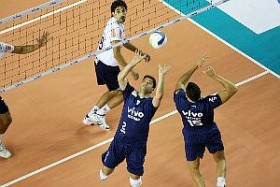 For the outcome of the match were relevant 30 points of the opposite Czech Rejlek, 18 points of Henrique (MVP of the match) and the attack of Temponi in 3. set.

In another match, Vini of Volei Futuro with 6 aces (MVP of the match) helped his team defeat RJX with 3:0.
The national team of Marlon, Theo, Dante and Lucas is the disappointment of the tournament so far, but now it is safe to take part in the playoffs where it will be a dangerous opponent.

Medley / Campinas  obtained the place in playoff thanks to the victory of 3:1 against UFJF, and got to 6. place.

Sao Bernardo was surprisingly beaten by Londrina on its court. However, Renan and his teamamtes still retain 8-point lead ahead of Volta Redonda, which has won in tiebreak on the court of Montes Claros.