The players of Politechnika WARSZAWSKA are certainly disappointed after yesterday’s defeat to Tytan AZS CZESTOCHOWA in the first final match of the 2012 CEV Volleyball Challenge Cup – Men. However, the guys from Poland’s capital city still hope to turn the odds around as they play the return match this coming Saturday in Czestochowa. “We have been working very hard for the past three months and so we are not going to give up that easily after this first defeat” says team captain Marcin Nowak. 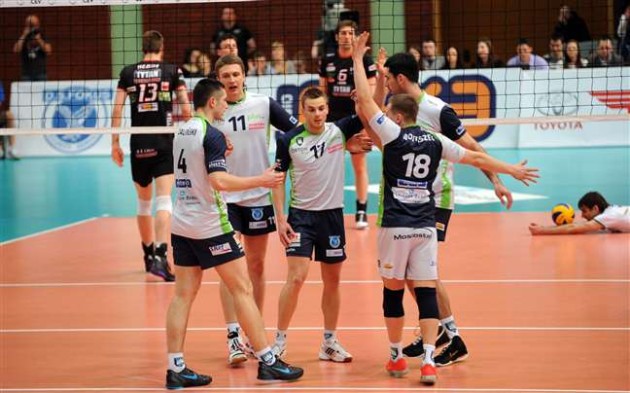 Politechnika still believes in its chances to redeem home defeat

On the other hand, Dawid Murek – the leader and best scorer of Tytan AZS CZESTOCHOWA – is evidently happy with the result: “We are really pleased with the result but this was not an easy win. As it already happened a few times this season, we were enjoying a good margin in the score but then we somehow got stuck and we could not finish any rally as we were supposed to do. Luckily everything ended happily for us as we got past these difficult moments and finally won the match. This is a first, very important step towards the win of the Cup”.

“It was not an easy match for us; although we scored a win, there is no time to celebrate yet” adds his coach Marek Kardos.

“We know that Politechnika will be playing its best in Czestochowa to go for the golden set”.

“I have to congratulate Tytan AZS CZESTOCHOWA on their win; this was quite a good game as there were some great actions. They did not make that many mistakes and I think this influenced the final outcome of the game” stresses Politechnika mentor Radoslaw Panas.

“They played better than we did in the last sections of those three sets that were very close. We can only regret that we missed some opportunities but we are not going to surrender. There is still another match left and we will certainly fight until the very end. Yesterday we suffered our lack of experience but we will compensate for this with our great determination” he singles out.

“We did not stay cool especially in the deciding moments” states captain Nowak.

“We did not finish some easy balls and if we only had finalized such actions properly, we would have won the match. However, this defeat does not mean we are out of contention as we will do everything we can to win in Czestochowa and call for the golden set”.

BRA W: Fabiola is highlight of first round of semifinals

CEV CUP W: Check out e-book to get the latest info about the final game in Busto Arsizio