BRA W: Fabiola is highlight of first round of semifinals

In the first round of the semifinals, the highlight was the setter Fabiola of Sollys / Nestle. Apart from being the best setter, she is also the fifth in block, the eighth in service and the third in defense. 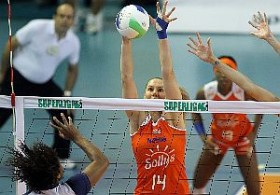 Sollys / Nestle took the lead by winning Usiminas / Minas in the first game of the series with 3:1. The team from Sao Paulo  has three players who have played excellently in the round. The libero Camila Brait was among the best players of her position and was also ranked the first in defense. The Olympic champion Jacqueline was the most efficient in the reception, while the opposite Destinee Hoker was the top scorer of the round, with 17 points.

For Usiminas / Minas the prominent performance showed the center Fernanda Isis. She was also the best in the block and service.

In another semifinal match between Unilever and Volei Futuro, the team from Rio went ahead and won the first match with 3:0 in Araçatuba (SP). The opposite Sheilla of Unilever, left the court as the top scorer and ended the round as the best spiker.

Sollys / Nestle and Unilever need one victory to the final, which will be held on April 14, in Maracanazinho in Rio de Janeiro.