Tytan AZS CZESTOCHOWA needed almost three hours and a golden set to finally claim the 2012 CEV Volleyball Challenge Cup after a great and very emotional return game against the compatriots of Politechnika WARSZAWA (25-14, 25-22, 22-25, 23-25, 11-15; golden set: 18-16) that was played in a totally packed “Hala Polonia” on Saturday afternoon. 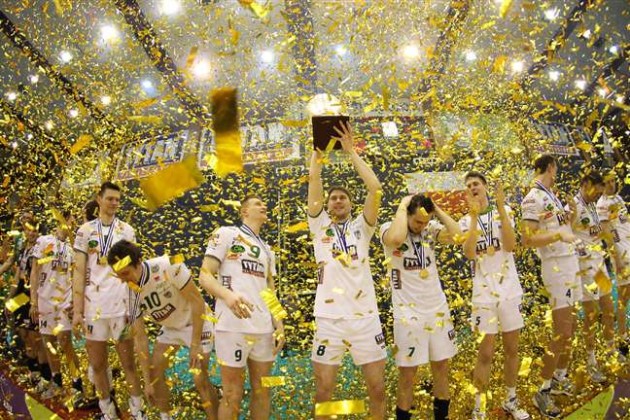 After scoring an away win this past Tuesday in Poland’s capital city and going up by two sets, it looked like Tytan AZS CZESTOCHOWA was comfortably cruising to a second victory but the head coach of Politechnika, Radoslaw Panas, intelligently opted for some back-up players to eventually change the course of the game and call for the deciding golden set.

The home guys asserted their supremacy right by the opening set (8:6, 16:10) standing out with their blocks before team captain Dawid Murek aced for the final, massive 25-14. Politechnika found its way into the game enjoying a margin of three by the first mandatory stop of set 2 (5:8) but CZESTOCHOWA fought back promptly to level at 9.

Afterwards the game turned into a neck-to-neck race with local libero Adrian Stanczak delighting the home audience with his incredible actions in defense. Tytan AZS gradually moved up (20:17) and could eventually pocket the provisional 2:0 (25-22) and by this moment the fate of this final looked already determined.

Politechnika changed its spikers in set 3 and the guys in green jerseys could finally control the game by imposing their pace with solid blocks and excellent defense, even though Tytan AZS did also stay tuned after opting for some substitutions.

Politechnika finally unleashed its full potential and wrapped it up at 22-25 to stretch the game to a fourth set. WARSZAWSKA extended that good momentum also to the opening phases of set 4 (5:8) with the block being the fundamental where the players of Politechnika were absolutely outstanding, chiefly via the contribution of Estonian middle blocker Ardo Kreek.

After leading by 3 points at the second technical time-out, Politechnika had to stand a furious comeback of the home side that drew level at 22 but could resist and stay cool enough to call for the tie-break (23-25). The deciding set was not much different, with Politechnika dictating the tempo as teams changed sides of the court (5:8) opening the gap up to 4 points and eventually sealing it at 11-15 to reverse the result of the first game played in Warsaw only a few days ago and go for the golden set.

Tytan AZS CZESTOCHOWA initially trailed 0:6 there but Politechnika relaxed a little too early and some mistakes helped the home side storm back (4:6). Politechnika stamped another positive break moving up 6:10 and only a few moments later their libero, Damian Wojtaszek, got injured and was forced to leave the court.

This evidently influenced the remainder of the game, and by profiting of some more errors by Politechnika, CZESTOCHOWA fought back to 13 all before the spectators followed the very last actions standing on their feet. Politechnika missed a couple of chances to decide the game in its favor and finally – after two blocks – CZESTOCHOWA could celebrate its first European trophy, with captain Dawid Murek being awarded as MVP of the finals.