Zurich, Switzerland, December 13, 2011. This coming Thursday Volero ZÜRICH will play host to the pre-favorite in Pool C of the 2012 CEV Volleyball Champions League – Women, i.e. Russia’s Dinamo KAZAN. The Russians claimed their first match by edging the Czechs of VK Modranska PROSTEJOV in five sets before they went to Poland to down Atom Trefl SOPOT in straight sets. 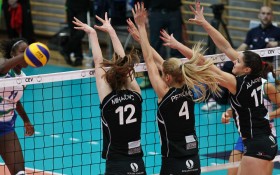 Ekaterina Gamova paced Dinamo there with 15 points and head coach Rishat Gilyazutdinov stated this was Dinamo’s best match of the season.

However, that journey left some fatigue as Dinamo lost its last match of the national league 1:3 to Omichka OMSK and is currently ranked only sixth in the provisional standings. Therefore Volero hopes to go for a good result to the delight of the home crowd.

“We go into this match knowing that we have our own chances and without being afraid of our opponent” says head coach Svetlana Ilic.

“We have nothing to lose from this match”. Volero will mainly rely on Jelena Alajbeg and Brankica Mihajlovic who top scored in the previous games with SOPOT and PROSTEJOV totaling 23 and 22 points respectively.

“We have a defined game plan and we know how to take care of Gamova because she is the player that can turn the match around even all alone” adds Ilic.

“We will play free of any pressure but still we know the quality of the players that will be standing on the other side of the net. And if they even give us just one millimeter, we will jump in and take our chance”.

Last year Volero caused a sensation by beating another Russian team, Zarechie ODINTSOVO, in the Playoffs but it is hard to make any comparison as per the words of the Serbian-born head coach: “It’s hard to compare these teams but since they play in a very tough national league, every week they have some kind of a Champions League game. However, this past January we already demonstrated that we can beat the pre-favorite, so let’s wait and see”.

ITALY Serie A1: “Serve and dig-block our main weapons!”