Serbia is one of the strongest teams in the world and is currently the European champion. The opponent of Spain in the second game of the Qualifying Tournament for the Olympic Games is one of the favorites, despite the defeat they suffered against Bulgaria. 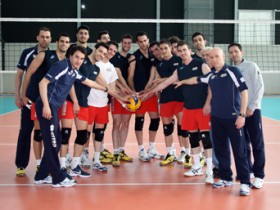 “The Serbian team has two characteristics, a very high technical level and extremely competitive spirit,” says the national coach of Spain, Fernando Munoz, “We will have to try to exploit our qualities to defeat them,” he adds.

The Serbian players, apart from their competitivness, possess exquisite technique and great physical power. These are the players that are on the high level and are active in all the best leagues in the world.

The best members of the Serbian team are the extraordinary receiver Nicola Kovacevic, the setter Vlado Petkovic, the center Dragan Stankovic and the opposite Aleksandar Atanasijevic.

“They are the champions of Europe and a very tough opponent,” said the Spanish captain Hernán Guillermo, “We have to play an aggressive game and to take risk in service and block” said the Spanish setter, who adds that the key to the victory will be “aggressive fight for every ball.”