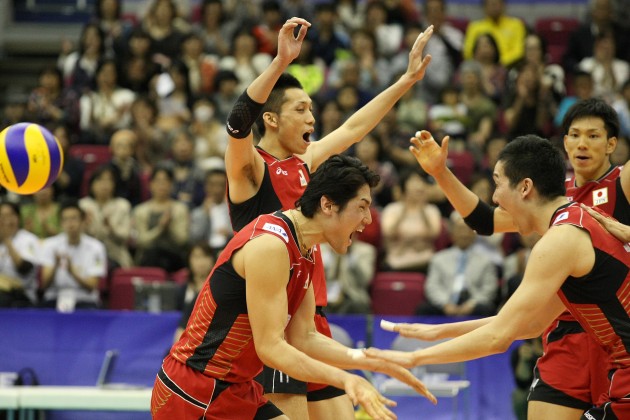 Japan had never beaten Cuba in World League play before, losing all eight of their contests going into this match. To the disappointment of the home crowd, Cuba made it nine straight victories, despite Japan giving them a rough ride at times,  especially through star player Tatsuya Fukuzawa.

Leading Cuba was the dynamic duo of young captain Leon Venero Wilfredo with 19 points and powerful Ramos Fernando Hernandez with 15 points, three through blocks. Japan was carried on the day by Fukuzawa who scored 17 points, four of them aces, in a brilliant performance despite the loss. His captain Takahiro Yamamoto tallied 12.

The teams started out tight but Cuba eventually edged ahead of the home side 10-7 when Hernandez put a hard block on Japan’s Ishijima. Despite a flurry of errors Cuba extended their lead to 17-13, but were pinned back when Tatsuya Fukuzawa ignited the crowd with a stunning block on a high flying Leon. Japan’s Yuya Ageba kept his side close with a hard spike followed up by a precision ace to draw within two for a moment at 23-21. But Japan’s luck ran out when Fukuzawa dished up a net serve on Cuba’s set point, making it 25-22, ending a set that, by all accounts, was not as close as it looked.

Japan rebounded well to open the second frame, with strong attacking from Yamamoto and Fukuzawa to put them ahead 8-4. The latter was serving beautifully, serving up three aces in the set, the second and third consecutively, to move ahead 19-14. Kota Yamamura sent through a wonderful spike off a quick pass from his setter to give the home side set point at 24-20. But Cuba’s young captain Leon carried his team back from the brink, scoring three of five straight Cuba points to grab a set point of their own. David Fiel Rodriguez would end a miraculous comeback set for Cuba putting a hard block on Japan’s Yuta Yoneyama to take the second 28-26.

Things stayed close early in the third set as well, with the sides tied at ten. But again Cuba pulled off a run of five straight points to take a 15-10 advantage, this time off the back of a pair of scores Fiel. Japan’s Fukuzawa had yet another ace up his sleeve, and threw it down to draw within two at 19-17. But Cuba, who had been blocking well all day, closed out Japan twice more, Fiel with his fifth to go up 23-19, and then Mesa to clinch the match 25-20, three sets to zero.