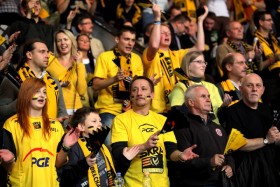 The hosts showed great fighting spirit after their opponents played a perfect game for the first couple of sets. This is the third consecutive win in as many matches for BELCHATOW while ACH Volley had previously beaten Budvanska Rivijera BUDVA 3:2 and lost in straight sets to TOURS VB.

Karol Klos and Bartosz Kurek top scored for PGE Skra with 17 points, with 16 being contributed also by Wlazly and Winiarski.

Alen Sket was the best scorer of the game with 26 but still rather disappointed: “I do not feel that good as I had to stop for 2 weeks because of an injury”.

“We took one point from this game which is not too bad but we are a little disappointed. PGE Skra played well from the start but we managed to take two sets. Unfortunately we did not close the match” says ACH Volley captain Andrej Flajs.

“It was a nervous game, we played good for the first two sets but our concentration faded away after we realized that we had already claimed one point” adds head coach Igor Kolakovic.

“I knew that ACH Volley is a strong side and we did not have to underestimate our opponent. They played good Volleyball and we had to claw back to catch up with our opponents” concludes home mentor Jacek Nawrocki.