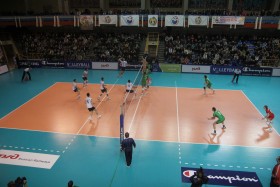 By taking three more points Lokomotiv is currently ranked second in Pool E and the Russian rookie is on a good track to claim a spot for the Playoffs 12 of the 2012 CEV Volleyball Champions League – Men.

This match was extremely important for both sides as Italy’s Lube Banca Marche MACERATA is on top of the standings in the group and the run for the Playoffs is still more than open.

Even though they were missing their superstar Ivan Miljkovic, the guests from Turkey opened with a good tempo (5:8) but Lokomotiv stormed back quickly via the serving turn of Cuban Michael Sanchez and some massive blocks.

Slovak Lukas Divis paced the Russian side in this set that eventually ended with the score of 25-17.

Lokomotiv dominated the scene in all fundamentals also in the second set and even though Daniel Castellani, the head coach of Fenerbahce, tried out many substitutions, still it did not help.

This trend continued also in the third set, with setter Alexander Butko and middle blocker Ryan Millar showing great synergy while on the other side of the net the contribution of Cuban Leonel Marshall was not enough to turn the odds around.

“We were a little nervous before the start of the match but we managed to concentrate properly and take the game. I am not going to make any calculation now as tomorrow we are already flying to Kazan where the finals of the Russian Cup will be held next week” says Lokomotiv coach Andrey Voronkov.