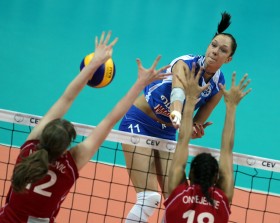 Learning from their experience in Switzerland, the players of Dinamo served regularly on Olga Sazhina who committed quite many mistakes in reception, so KAZAN went quickly up 8:4 in the opening set.

The Russian side opened the gap with good blocks and easily pocketed the first set.

Set 2 was marked by a great serving turn of Aleksandra Petrovic for Volero, as she moved the count to 23:13 for the guests, before Gamova fought back with her killing spikes but two errors from the Russian star handed the set over to the Swiss side.

A different scenario unfolded in set 3 where Maria Borisenko claimed a break for Dinamo (21:17) before two blocks of Regina Moroz on Brankica Mihajlovic sealed the final 25-20.

With some 1’200 fans in attendance, good play was displayed tonight in Kazan and the fourth set was no exception to that trend.

However, Volero missed a real leader, was sidelined by a low efficiency in attack and only Jelena Alajbeg finished the game in double digits.

Dinamo seized the night and eventually booked a ticket for the 1/8 finals in its debut season in Europe’s most elitist competition.

“Our team is young so this is the reason why we lack consistency” comments the Russian spiker of Volero, Olga Sazhina.

“We played good for some moments but then committed silly mistakes and you cannot afford this if you play a strong rival like Dinamo KAZAN”.

“Volero caused no surprise tonight and it is important we were able to play our own game. We failed to achieve this goal only in the second set” stresses home coach Rishat Gilyazutdinov.