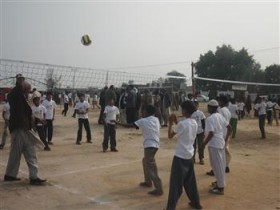 This was the first time the Pakistan Volleyball Federation (PVF) had held a volleyball event of this size and participants were split into 100 teams for the day, playing across nine courts.

Cool Volley aims to develop volleyball through schools by providing them with the necessary tools to introduce students to the sport.

The competition was a complete success, with the FIVB providing T-shirts and nets, while the PVF provided balls. Students from 10 schools took part and it is hoped it will boost interest in the country.

Students said they enjoyed the event and it is hoped that the new skills taught to teachers will help spread the game further throughout the region.

Additionally, PVF plans to organize a three-day Teacher Coaching Course in the Shakargarh District during the last week of January.

Italy: Southern win over the north