When serving a floater, hit the ball with the heel of your hand, keeping your hand rigid, which will make the ball less likely to spin when it moves through the air. Read latest volleyball news on Worldofvolley.com. 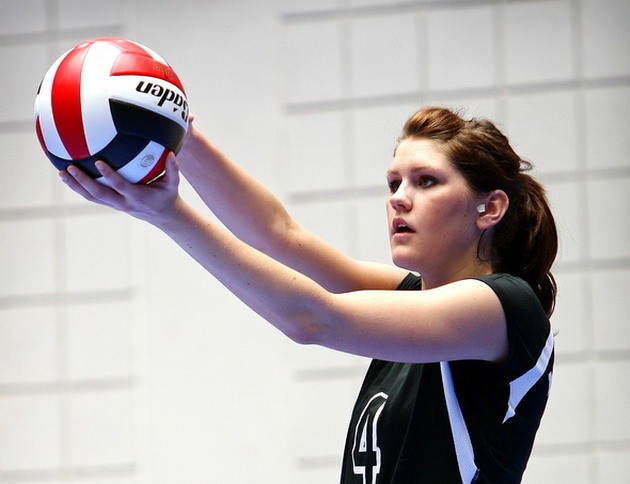 Know Where You’re At

One of the most important things to remember in center back is where you’re at … at all times. It becomes even more important when the ball is going to be close at the end line. If you’re in the proper position, it will eventually become instinctual, but it takes time. Condition yourself to always know where the endline is, and you’ll become a more effective center back.

Talking about moving the feet as the key to good passing, let’s talk about how to get to the ideal spot. First, you need to make your judgement early as to where you’ll need to be when the ball comes down. Get there in plenty of time.

And to get you there, take small, short steps, rather than big, lanky ones. It allows you more precision, and helps you get into position more smoothly.

After the set is in the air, you must turn your attention to the hitter’s body language. Here’s four ideas on reading your attacker:

If the ball is inside the hitter’s shoulder, they will usually hit an angle shot.

If the ball passes the midline of the attacker’s body, they’re usually preparing for a line shot.

If the set is tight to the net, you’ll have to release more quickly to get your hands on the ball. The hitter will have to reach closer to the net to hit, and you’ll be able to surround the ball if you get there in time.

A set that’s off the net will likely be hit cross court, because it’s a higher percentage shot for the attacker. Remember to delay your jump a split second longer, though, when the ball is back farther, since it will take a little longer to reach the net.

A spiker making a late approach will generally hit angle. They’re just concerned with salvaging some kind of attack, not with doing anything fancy at that point.

If a spiker runs underneath the ball too far, that ball will usually be hit deep in a looping fashion or something off-speed.

This tip is for hitters who want to be in the game for the long haul:

The best hitters in the world have told me you don’t pound everything – you get the same points for a tip or wipe, and it saves your arm for those times “when you gotta swing away.”

You first have to believe you can do it. Then you have to be aggressive. If you don’t go all out, many balls will dribble down in front of you. Finally, you must be relentless. You can never take a play “off.” Great blockers will give everything they have to try to get a hand on every ball in their vicinity.

“CAR” blocking can make you a blocking superstar

One of the biggest mistakes blockers make is to close their eyes at the moment of contact. It’s hard not to do, but important to avoid. You need to have your eyes on the ball at all times in order to stuff it, touch it on a tip, or whatever happens. So keep your eyes open.

Here’s a few tips for becoming a superior blocker:

1- A shorter hitter will often have developed a wider variety of hits, including line shots.

2- The farther back a ball is set from the net, the more likely an outside hitter is to hit angle.

3- Sometimes, if you pay attention, you can “steal” signals from the opposing setter and hitter if you watch.

4- If a player has run too far underneath a ball, it’s likely to be an off-speed shot or tip.

5- Every hitter has a favorite spot. If they get lazy, they will hit that spot. Learn their favorite, and take it away from them.

6- If a CF begins edging slightly forward as the play develops, they may be getting ready for a quick set. Their body language can give them away.

If a player has just shanked a serve, they should automatically get the next serve, too … and the next, and the next, if they don’t get one up. There’s no room for sympathy here. Make them pass; that’s what they’re in there for. And if they can’t do it, make the opposing coach sub them out. In the meantime, rack up the points for your team.

Humming the Ball In

A tip that will help you concentrate while passing: Try “humming the ball in.” (Do this silently during game situations, otherwise folks will think you’re out of your mind. But you can practice it aloud until it becomes a habit.)

Since it’s important to watch the ball until it actually comes into contact with your arms, try humming until that contact occurs, and then, at the moment of impact, give a little grunt, “Huuh!”

It sounds crazy, and that’s why we don’t recommend you do it aloud in public, but it’s a very effective way of making sure your concentration is total when getting ready to pass.

Check out our Fitness section, every Saturday a new story! Tomorrow read about 100 reasons you should work out today.

ITA W: This is how Fopapedretti players...