Three members of Serbian national team were spotted last night eating at the famous “Mandzha Street” in Sofia crowded with fast food restaurants located in City of Students, part of the Bulgarian capital. 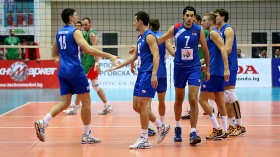 Apparently quite hungry, they stopped on the nearest donner kebab restaurant.

When they were spotted by other traders, however, they were immediately called up from all sides, but remained on their first choice and patiently waited in line. Interestingly, the whole thing has occurred around midnight.

Serbia has quite rejuvenated squad and obviously they like the nightlife in the Bulgarian capital, or at least to be out in late hours.

Serbia came to Sofia to play friendlies with the hosts in preparations for European Championship in Poland and Denmark. So far, two matches were held, and the score is tied 1-1.

See the Wov Communuty profiles of Serbia and Bulgaria.

Read similar stories in our section Did You Know?

Guidetti & Toksoy: Soon in marriage, but on EuroVolley against each other

PHOTO OF THE DAY: “Tsetso” begins his...