Core Strength Training – Not Just About Your Abs

Core strength training may be a relatively new, buzz term in the fitness industry but coaches and athletes have understood its value for many years. 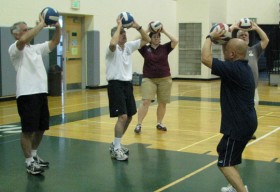 Core Strength Training – Not Just About Your Abs

The core region consists of far more than just the abdominal muscles. In fact core strength training aims to target all the muscles groups that stabilize the spine and pelvis.

It’s these muscle groups that are critical for the transfer of energy from large to small body parts during many sporting activities.

The muscles of the trunk and torso act to stabilize the spine, pelvis and shoulder girdle. From this solid, balanced base the limbs can be moved powerfully and under control. In fact before rapid movements of the extremities can take place, the central nervous system stabilizes the spine in anticipation (1). The rate at which the core muscles stabilize the spine may have a direct effect on the power of limb movement (2).

Core strength training differs from many traditional weight training routines by working both the lower back and abdominals in unison. The same is true for the upper and lower body. All athletic movements incorporate the core in some way. Very few muscle groups are isolated. Instead the whole body works as a unit and core strength training endeavours to replicate this.

What are the benefits of core strength training to the athlete?

Increased power output from both the core musculature and peripheral muscles such as the shoulders, arms and legs

Reduced risk of injury (the core muscles act as shock absorbers for jumps and rebounds etc.)

OG: Selling England by the pound