FIVB Heroes is a crucial part of the FIVB’s new marketing approach, which also includes a comprehensive brand relaunch that aims to raise the profile of athletes and FIVB events through innovative communication and PR activities. The messages are short and snappy: “It’s not how big you are, it’s how big you play,” say the USA’s Olympic and former world champions Todd Rogers and Phil Dalhausser. “Raise your expectations,” adds Brazil’s Maria Clara Salgado, owner of the fastest serve on the women’s FIVB Swatch World Tour. 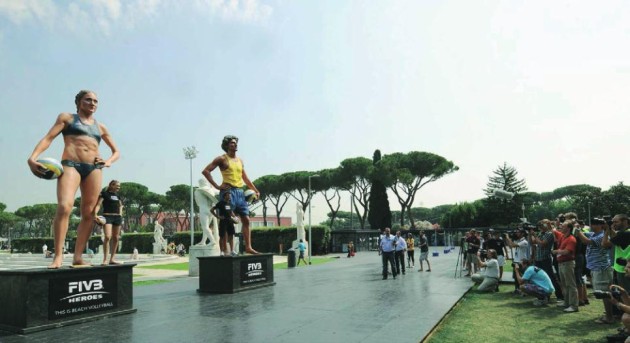 In all there were 29 beach volleyball “heroes” from  six nations on hand to help with the launch at the Foro Italico. Representing volleyball another 13 women and 15 men from a total of 16 countries were introduced to the public in their new “Hero” roles at the beginning of July at the World League Finals in Gdansk, and they will also appear at the World Grand Prix Finals in Macau. Thirty-second trailers will be available to watch at tournaments and on television, and awareness is also being raised at www.FIVBheroes.com and on Facebook.

The man behind this stunning new campaign is FIVB Executive Vice-President andTreasurer André Meyer. “We couldn’t have asked for a better venue to launch the campaign than Rome, a place full of symbolism and history,” he said. “We have undertaken a significant and crucial step in the repositioning of the FIVB and the sport of volleyball but this is only the beginning. Now the implementation will start: we want to be positioning volleyball and beach volleyball as highly athletic and highly professional disciplines, played around the globe and backed by a strong brand”.

“The second launch held in Gdansk was equally successful and proved that the FIVB is moving in the right direction with the full support of the national federations and the athletes, with global interest coming from the media.”

The selection procedure is as rigorous as you would expect – only those with eye-catching charisma who act as role models for future generations are considered for membership of this exclusive club. Other factors brought into consideration are the
competition statistics from recent years, tournament wins and ranking points. Only those who score highly enough in all of these categories earn the title of “FIVB Hero”.

In Rome two giant statues of double Olympic champion Kerri Walsh and double world champion Emanuel Rego, made from polystyrene and plastic, each measuring five metres high and weighing 330kg, were on display at Foro Italico to mark the
launch while in Gdansk 20,000 postcards were distributed and giant-sized billboards dominated the
outside of the Ergo Arena, impressing upon many the immense scale of such a project.

Over the course of the next year giant statues of volleyball and beach volleyball Heroes will make special appearances at a tournament near you before again being on display to millions at the Olympic Games in London where the FIVB expects its
“Heroes” campaign to reach its climax.

If Starovic is a hero, how come Miljkovic isn’t one as well ? If Rouzier is a heroe, how is it possible for Nikolov not to be one ?
And what about Tille when neither Verbov, Henno or Sergio are in the list !

How can someone be stupid enough to write that these are the players “with eye-catching charisma who act as role models for future generations”, when Nikola Grbic is not among them ?

ITA W: Late dinner in Milan because of Piccinini

The Game Will Find a Way (PHOTO)