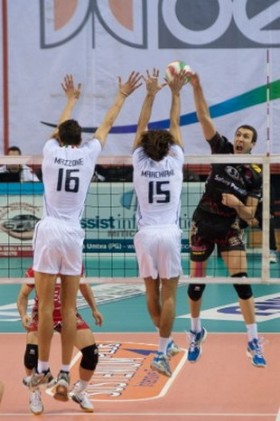 Coach Kovac said: “I am very happy to renew the contract with Nemanja, who gave us a lot in A2, and I am convinced that he can do even more. He has the qualities to be a strong player in the championship as the series A1. President Sirci and athletic director Rizzuto wanted him to stay here in Perugia, and I am glad that Petric really wanted to stay with us. in short, we are very satisfied, Nemanja confirmed its qualities and all believe in him. ”

Nemanja Petric is now with his national team, he and Vujevic, Daldello, Tomassetti, Tamburo are the main players of the team that has sparkled in A2.

Sports Director Rizzuto said that whole team was pleased with his play:
“Petric first dispelled all doubts about the approach to the Italian league, after he had an outstanding season in A2. This led him to take an important role in our team. His dedication and his plays have been recognized by Serbia, became a member of the national team.

We are convinced that he will continue to make progress in A1, we are also happy because in addition to technical skills Petric was a sportsman undoubted moral character. We will see in the coming days, if the market allow to further increase the number of confirmed players.”