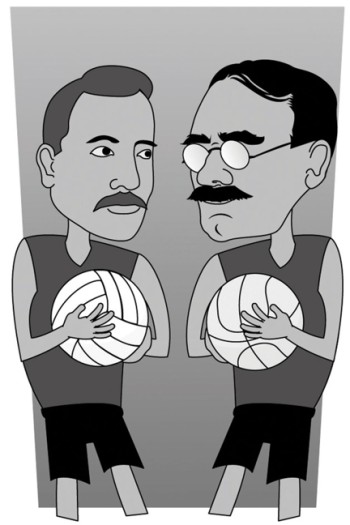 Most of you already know how related these two sport cousins are: basketball and volleyball were invented miles apart (in Springfield and Holyoke, Mass., respectively), four years apart (in 1891 and 1895), by two men that knew each other (James Naismith and William Morgan), and both had ties to the YMCA. Indeed, Morgan invented volleyball to be more suitable—“less physical”—for businessmen than basketball.

When my fifth-grade daughter said that she wanted to start playing basketball this year, I jumped at the chance to coach her team and to generally be involved with the basketball program at the school.

Some of these girls started playing in fourth grade and a few of them just started this year. Since the first year of playing any sport is mostly about learning, the levels of skill varied greatly between the “veterans” and the rookies, and these differences were especially noticeable during the first few weeks of practice.

Coaching first and second year players has made me realize how much about basketball I take for granted. I started playing in seventh grade, learned most of the fundamentals that first year, and then spent the next five years working to improve those skills (and of course, I’m still working on my jumper).

One of the most basic things that almost all of the girls had trouble with is doing a proper layup. Specifically, none of them seem to be able to get their basic footwork down and to be able to take off from the correct foot while on the run. For the first time, I had to think about how to teach a skill that I’ve been doing since I was 12. It’s hard for me to remember ever not knowing how to do a layup or shoot a jump shot.

It’s the same with volleyball. One night when we arrived at the school for one of our basketball games, the seventh and eighth grade girls’ volleyball team was just finishing their first practice. At our school, seventh grade is the first year for girls’ volleyball, so these young ladies were pretty green. Watching them for a few minutes reinforced to me how much about the mechanics of volleyball I take for granted. The hitting approach in volleyball is akin to the layup approach in basketball, a foreign skill that everyone has to learn when they first begin playing.

This also got me thinking about how skillful volleyball really is. And with all due respect to basketball, I think volleyball actually requires more skill than its cousin sport.

Case in point: shooting a jump shot in basketball requires a unique skill, but no one gets called for a violation if they shoot a bad jump shot. The worst that can happen is a missed shot. Not so in volleyball. Players have to learn to properly contact the ball at all times. If you pass, set, or hit improperly, a violation is called and the other team gets a point. And if you can’t get a serve across the net and in bounds, you also give a point to the other team.

Volleyball is also more of a team sport than basketball. In basketball—at least on offense—one person can truly do everything. If you have one good player, the other four can clear out and let that player score without any other player having to touch the ball. In volleyball, you can have a great hitter, but without a skilled setter, your team will be toast. Likewise, if no one can pass a serve, a setter or hitter may never even get a chance to contact the ball.

Jumping ability is important in both sports. In volleyball, however, a maximum jump is needed on almost every play, for both offense (hitting) and defense (blocking). In basketball, a player can shoot, rebound, and perhaps even dunk without having to put their maximum effort into their jumps.

Speaking from experience, I can tell you that my volleyball game isn’t what it used to be when I was younger, specifically because my vertical isn’t what it used to be. My basketball game, however, is pretty much the same as it always was. I may not get up as high for rebounds, but I can still compete on the boards because I can use my body to box out my opponent and still get up reasonably high to grab the rebound. I can also still run and shoot a jumper. But in volleyball, a diminished vertical hurts a hitter’s ability to hit around or over blocks and it hurts a blocker’s ability to stop opposing hitters.

Another difference between volleyball and basketball is that it’s a lot easier to practice basketball alone. I used to spend hours every week shooting around and working on my ball handling. With volleyball, I have yet to find a good way to practice hitting by myself. And for playing these sports, you need four people to have a serious volleyball game, whereas in basketball, two is sufficient.

Although these two sports have their differences, they complement each other well. Having both sets of skills will make players better athletes overall and playing both sports is a great way to cross train. Taking breaks from volleyball to play seasons of basketball will lessen the repetitive strain on a volleyball player’s shoulder and knees. It also gives players a change of pace to help avoid the dreaded “volleyball burnout.”

CEV M: Russia and Poland to cross their ways right in prelims of final round

USA M: You will never guess what...