Michael Jordan makes more money now than when he played

It’s good to be Michael Jordan. Even if you do own the Bobcats. Last year, Jordan made twice as much money as he did with his largest contract playing in the NBA. Athletes in the Jordan stable include Derek Jeter, Dwyane Wade, Carmelo Anthony and Denny Hamlin. 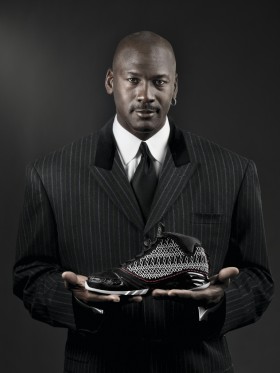 In the 1996-97 season, Jordan made $30.1 million, the season after that $33.1 million. (The Riensdorf and Kraus broke up the Bulls.) By the way, before those years Jordan’s highest salary was $4 million, so the Bulls made a lot of money off him before they had to pay up.

We estimate that Jordan earned $60 million over the past year mainly through his endorsement deals with Nike, Gatorade, Hanes, Upper Deck, 2K Sports and Five Star Fragrances. He also owns five restaurants and a car dealership in North Carolina. His annual earnings are greater than any other sports figure save Tiger Woods who topped our world’s highest-paid athletes this year….

When it comes to Jordan’s annual earnings, Nike is his meal ticket and why his endorsement earnings are now higher than when he played.

Jordan signed a five-year, $2.5 million pact with Nike in 1984 out of college. The Jordan Brand exploded and now has annual revenues of more than $1 billion with MJ getting a piece of the action. Athletes in the Jordan stable include Derek Jeter, Dwyane Wade, Carmelo Anthony and Denny Hamlin. The Jordan Brand’s market share of the U.S. basketball shoe market is 71% according to SportsOneSource.

Notice the Bobcats are not on that list of money makers.

Just so we’re clear, Jordan last played for the Bulls 13 years ago and last played for the Wizards eight years ago. Yet he has been able to remain above the fray, a political and largely out of trouble, which has helped keep his image clean and endorsement deals in tact.

Check out the news from our Fun did you know? section, every Friday a new story! Tomorrow read about  How to gain weight.

Roberto Baggio – One look at La...

Where is Alberto Tomba now?