The center, Sotirios Pantaleon arrived in Latina. For the Athenian, who is 202 centimeters tall, it is the first time that he leaves Panatinhaikos, the team that launched him to the top in 1993 and now is the last in the rankings in the Greek league. 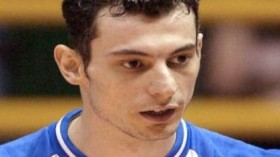 Prandi will have the opportunity to substitute Henry Cester and Carmelo Gitto with Pantaleon in the match with Fidia Padua, without Andy Hein.

Silvano Prandi: “He is an experienced player who will help us substitute our two young centers. But most of all he will help us after the departure of Hein”.

Candido Grande: “First of all I want to thank Hein for his time which he spent with us this month. We are lookig for his replacement on the market. Pantaleon is an experienced player who definitely will help us a lot  to the end of the season and in the playoffs with his experience. We hope that he will play in the first match on Sunday against Padua. “