After the World League has ended, Coach Javier Weber has every right to be angry due to disappointing performance of his team at the latest competition. 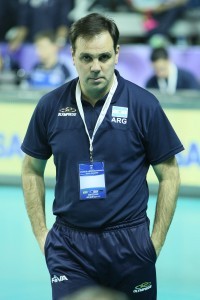 As Argentina failed to qualify in the Final 4 of the 2013 World League, coach   Weber publicly shares how he feels on his team’s performance. Both coach and the team are very frustrated with the result.

The team had chances versus Bulgaria but failed to step up their game when needed and the same scenario versus Italia occurred during the Final Round. Argentina lost both matches in 4 sets. Even with the loud cheers of their home fans, it still wasn’t enough for Quiroga, Castellani, Sole & team.

“I’m sick of being always close but can’t win. This defeat hurts me a lot and I feel that every player of this team must feel the same. You can’t laugh after having lost this way. I’m tired of this. It disturbs me when we don’t use and benefit from the chances given to us in matches we play. In our case, my team FAILED to react properly.’” says Weber.

Weber expressed that Argentina failed to demonstrate their real game versus the world’s best teams in the Finals. He also pointed out that every team in the Finals would not give their opponents easy points.

The 46 year old coach also adds that since 2009 his goal is to always lead his team in the Top 8 which they have successfully attained in the last few years, but to finish in the Top 4 remains a distant dream.

“It hurts a lot. We feel depressed but we know that we can’t lower our heads.” –Sebastian Sole.

“We had the chance to win it but we lost. It was the same in the World League and we didn’t correct it.” –Luciano De Cecco.

“When we make a mistake, we easily get frustrated. We feel the pressure.” -Libero Alexis Gonzalez.

“We had hoped that we could qualify, but we couldn’t do it. Neither did we win. We’re really disappointed.” –Nicolas Uriarte.

Weber’s final words to his team: “It must hurt, you have to feel it. You can’t smile be smiling.”

We could also add, can it be that the absence of Facundo Conte hurt the team badly?

Still, The 2013 South American Championship is coming up next for Argentina.

To read similar news, check out other Interviews.

INTERVIEW: Mark Lebedew for WoV – “My...