In Tokyo, were identified last members of women's Olympic tournament. For Russians, to guarantee a ticket to London on Friday, added Korea, Japan and Serbia. In total, the Olympics will bring together 12 women's teams. 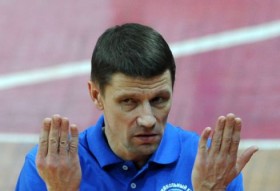 – Russian women’s team qualified for the Olympics, but lost due to injury Tatiana Kosheleva. She underwent surgery and at least six weeks to spend on rehabilitation. Was it worth risking health of one of the leaders of the team, which is now at risk to come to London in an imperfect state? – The first question for the head coach.

– No one is safe from injury. Wedid not risk the health of B. As for the prospects of London, this week I will meet with Tatiana and we discuss everything in detail.

– However, you will not deny, in the beginning of May on the European Olympic qualification in Ankara Kosheleva was not totally healthy. Many believe that it happened under pressure from the federation.

– It was not. In general. And What pressure can be? On the contrary, we are doing everything possible to take care of the existing staff. And from injury, I shall repeat, no one is safe. We had the half team in May, played through the pain. Club season was exhausting. Not to take Kosheleva to Ankara, I did not have the right: B proved with her game that she should be a part of the team.

–  The ending of tournament in Tokyo, as a matter of fact, was missed by Natalia Obmochaeva. She had some problems too?

– She had back pains. Lesya Makhno, is also far from an ideal condition. Gamova  did not lose in quality.

– On Yana Shcherban, arrived in Tokyo with the team, but who has now left the national team before the tournament, you did not expect that?

– We’ll see. If Shcherban becomes healthy, then she will call. In any event, the June gathering newcomers will be invited and added to the base of Victoria Rusakova and Daria Stolyarova. It is necessary for us to have a biggest possible choice. After all, this is the most problematic at this time.

– When will the team gather?

– The issue will be decided on Tuesday after returning to Moscow. The base date is on June 10th. There may be adjustments in one to two days. We will train, it seems to be in Anapa. Then we wait for three tournaments in Yekaterinburg, Alassio and Halle.

– What with Lyubov Sokolova which after Ankara in Tokyo has missed the tournament?

– Doors in the national team are open to all.

– Evgeniya Estes ten days prior to the first match of national team in London will celebrate 37 years of age. Can she indulge in the preparation?

– Indulgences are not necessary to her. A position at Zhenya – if I’m on the team, I live by its rules. And then, where does the age? Estes’s contribution to our success in Tokyo is huge. The seven wins and just one losing party would not take place, has not shown the best side of Ekaterina Gamova and Maria Borisenko. About the Gamova generally separate conversation. This tournament she played on the five-plus.

– Your predecessor Vladimir Kuzyutkin often criticized Superleague, advocated the expansion in quotas for foreign championships, claiming the players for the team without the stiff does not progress. You have the same opinion?

– I think we have a decent league, but it can become even better. Foreigners level Grün, Hooker, Osmokrovic, Vesovic, of course, it decorates. However, without match practice, our players will not become masters in volleyball.

– There is no contradiction? You also the club head coach of Dinamo Moscow…

– No I do not see the contradiction. Coach leading the club in any country is obliged to think about the interests of the team. In this sense we are all fine, as it should be.

– The Russian national team this year is not involved in the Grand Prix. Will you go to Lodz, where from 8 – June 10, will host the first phase of the commercial competition with our competitors for the Olympic medals Brazil and Italy?

– Maybe I’ll go. We intend to closely monitor all participants in Grand Prix. Of particular interest is my stage in Sao Paulo, where Brazil and Italy have added to the team of USA.

CAN W: Canada selects 34 players for women’s National A and B teams