CAN W: Canada selects 34 players for women’s National A and B teams

Volleyball Canada recently held a selection camp for Women’s National A and B teams, which successfully covered its run from May 21-25. A total of 49 athletes from different parts of the country attended the camp and went through designed process of Volleyball Canada Selection Committee. 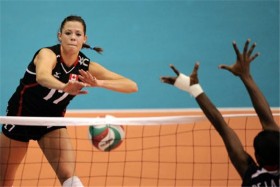 The Investors Group Athletic Centre at the University of Manitoba in Winnipeg facilitated the players and provided them with necessary equipment. At the end of the camp, only 34 athletes were shortlisted to be featured on the National A and B teams.

Those are the six players who represented Canada at the 2011 FISU Games in Shenzhen China. They also took part in the 2011 Pan American Games in Guadalajara, Mexico.

Rebecca Pavan, the sister of internationally renowned wing-spiker from Canada Sarah Lindsey Pavan, fulfilled the selection criteria and joined the team. Likewise, the daughter University of Manitoba Bisons Head Coach Garth Pischke, Taylor Pischke is also included in the chosen 34 player for Canadian National A and B Teams.

Alicia Perrin is the third player who has one of her family members associated with the sport of volleyball. Her brother Gord Perrin has played in men’s A team. For these three players, it is a family tradition to play the challenging sport of volleyball.

Currently, no specific teams have been decided yet. All the players are supposed to train together for almost a month.

However, the Volleyball Canada will select A Team at the end of June. The selected A team will continue training, while the rest of the players will move back to their homes. Team A will have few exhibition matches against women’s team from Argentina.

Moreover, the Canadian squad will have the ultimate goal to get prepared for the big tournaments such Pan American Cup and World Grand Prix.

GER W: Without Green, Apitz and Tzscherlich to the Grand Prix