Leonardo Leyva Martinez, the Cuban rising star and one of the players who will shake the world of volleyball in years to come. He holds the world record in scored points – 59! He achieved it in 2013 while playing for his current club, the Korean Samsung Bluefangs. A record hard to beat, even he agreed, although Leo had several 50+ performances since then. 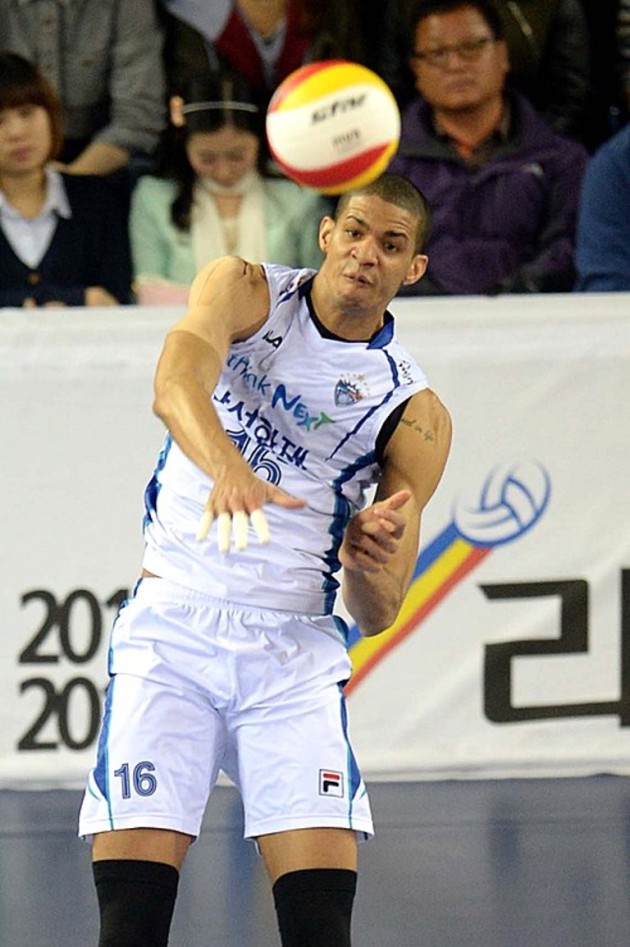 Leo is playing his third season in this team and won two titles already and his professional career lasts only four years. He leads the list of top scorers in the Korean championship this season. He had to leave Cuba for better life in 2009 and wait two years to start playing again. Regulations of the Cuban Volleyball Federation, as you all know.

What would you say about the quality of the South Korean championship and about the chances of Bluefangs to win a title?

“The quality of the South Korean league gone up to the high level since, in the last three years, great foreign players worldwide came, those who have played in the best leagues in the world. The chance of winning the title is something for what here has to be worked hard because the league and the teams are very competitive. Our main goal is the championship and for that we prepare as, I imagine, other teams, too”.

Are you planning to stay in Bluefangs even after the end of this season?

“Well, this is my third season here and I feel very well. I owe a lot to Samsung Bluefangs because I believe that Leo was here unveiled as a player. Being in this team, I grew a lot, as a player and as a person as well. I also learned a lot. I’m young player and if God permits, I’ll stay here for some time.”

Is this the best season in your career?

“I couldn’t tell if it’s the best season in my career since I’ve only been playing four years professionally. My professional life started in the Puerto Rican league in the team Cariduros de Fajardo where I won the title and was elected as MVP of the league and the finals. I think that opened many doors for me and it’s one of the reasons why I play in South Korea today. But I’d say that my best season here in South Korea was my first season, where I achieved several world records. One of them was 59 points, scored in a five-set match.” 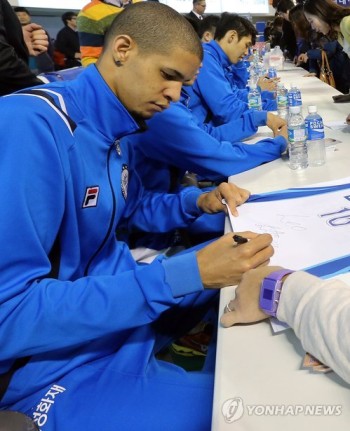 Do you think that you can break that record?

“I don’t think it’s possible for me to beat the record I achieved in 2013, because it was something I didn’t expect to achieve. In that game I was just thinking about hitting the ball. I think that things went very well for me since then. The closest I came to that record was in my second season here, when I scored 57 points. I’m not a player who chases for statistics. I focus more on what I can contribute to the win of my team. I think the statistics and the record come from a good result. You have to play a match and provide all it is necessary for your team.”

How close is the title of the league’s best scorer?

“No doubt, there is much competition in the South Korean league this season. All teams are well reinforced by foreign players like my compatriots Simón, Sánchez and Camejo. This is another example on the Cuban volleyball that it has very talented players in terms of statistics. I do not really care about the points, as I said, but there is a lot of competition among the top scorers this season. I think this award will take the player with the most consistency throughout the season.”

Do you regret because you cannot play for the Cuban national team?

“I cannot really regret for not playing in the national team of Cuba. For me it’s almost impossible. Like any player I wish I could represent my country. Since Cuba has many talented players, if things change we could achieve great results and reposition Cuba among the top countries in the world of volleyball. Cuba has players of high international level such as Osmany Juantorena, Simón, Michael Sánchez, Oreol Camejo, Wilfredo León, Raidel Hierrezuelo and many others that I could mention.”

Would you play for the national team if Cuban Volleyball Federation changes its regulations?

“There are many Cuban talents worldwide which are putting high the name of the Cuban volleyball, but now my interest is more focused on my career. Still, for several years I want to be able to represent some country. It would be impossible to play for Cuba since I’m a player who defected from the national team, but where I’ve always wanted to play, it’s in the national team of Puerto Rico. For many reasons it was the country that gave me a second chance to fight for my dreams, where I played for the first time professionally and I’m very grateful to the loyal fans that follow my career. I think I could bring a lot to the national team of Puerto Rico. That’s where I live, where I spend a lot of time on my vacation with my family and I’m sure, if I was given the opportunity to represent some country internationally, it would be Puerto Rico.”

NEW YEAR’S INTERVIEW: Russell Holmes – “I would rather be respected than liked”