Murilo Endres is the legend of Brazilian volleyball whose word is respected in that country. So, when he raised his voice against Brazilian Volleyball Confederation (CBV) due to their corruption scandal in 2014, along with several other current and former teammates from the national team, everybody knew things were serious. 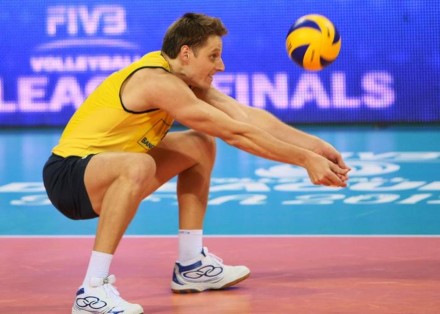 Murilo was also furious on FIVB because of the penalties that organization imposed to him, Bruninho and Brazilian head coach Rezende for unsportsmanlike behavior at the 2014 World Championship in Poland.

Third thing – Murilo was angry at FIVB President, his compatriot Ary Graça, accusing him that he didn’t make an effort to prevent those punishments.

Since that, things have settled down and unfriendly tones were reduced in 2015, but some questions remained unanswered until now…

Mr. Murilo, you and your teammates from the NT have been very clear about the corruption scandal in CBV. Please, explain to us once again – how did that affect you?

“It was a surprise to us. Those people in CBV were very close to us. We always said good things about the work of the Confederation and in the end we found that this work was not good as we thought.”

Are you satisfied with the decisions made at a meeting between the representatives of the players and the members of CBV and also with CBV’s actions lately?

“For now, yes, I am OK with that. I believe some steps were made in the right direction, but we still have to wait for a while to see results. Here, in Brazil, things happen a bit slower than in the rest of the world. We do believe in good faith and I have high hopes of what is about to come.”

There was a possibility that the best Brazilian players boycott the national team until CBV gets new leadership. Is there still that possibility?

“No. There’s no possibility of boycott. Decisions were made and we have to wait. I can’t say about the future, but for now, no chance.“

FIVB imposed severe penalties to you, your teammates and head coach Rezende in 2014. Do you think that FIVB is taking revenge on CBV over you because of a corruption scandal?

“It wasn’t coincidence. Revenge is a strong word, but things like these do not occur without a reason.”

CBV has announced it will cancel the organization of 2015 World League Finals because of those penalties. In the meantime, Brazil confirmed to host that tournament. But, were you satisfied with that kind of reaction from the CBV?

“No. One thing has nothing to do with the other. It is important to make the finals here. We can use it as a test for the Olympics. We need to separate these two things at this point.”

The Olympics in Rio de Janeiro are still far away, but is there a possibility that some older players like Sérgio, Gustavo or Dante play again for Brazil at that tournament?

“Out of these three, I think Dante has the best chances. Last year, he was left out due to physical problems, but was recovered and he is doing an incredible in Super League. Serginho and Gustavo are close to 40 years of age. Of course they are able to play, but they chose to stay out and we have to be thankful for all the good services they provided with the national team.”

Your wife Jaqueline is playing again after having trouble finding the club, last year. You were also involved in solving that problem. How much was that period difficult for both of you?

“The biggest difficulty was to see her without a team to play. Two times Olympic Champion and she was without any team. All of this was because of this ranking which only exists in Brazil. All over the world the tournaments are played without this ranking, but here, there are people who still think that this helps to keep the balance.”

Shoulder injury has separated you three months from playing in SESI-SP. How does it feel to be back on the court?

“I’m still recovering, but I had to do this surgery and finally end the pain in the shoulder. Now I expect to play until the end of my career, with no more stops.”

POL W: Four names – one place for coach of Poland