RUS W: Ovchinnikov – Olympics is the peak for any athlete

Ovchinnikov talked about the Russian team, the Olympic Games in London and the main favorites on the tournament. 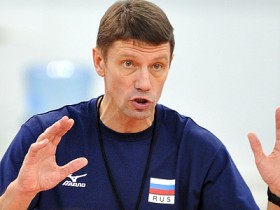 – Several days remain before the start of the Olympic tournament. Tell us how the team spends the last days in Russia, and when are you going to London?

– We work in Novogorsk at our training base. Today is the last work day and on Tuesday, July 24, we fly to London. We will have four days before the first game which is scheduled for the 28th.

– How many people are there in the volleyball delegation?

– Are you satisfied with the working process? Are the girls in good condition?

– At the moment everything is fine, we are moving according to the plan. Regard to health, so far there aren’t any problems.

– Will Lyubov Sokolova and Tatiana Kosheleva get in shape for the start of the competition?

– Lyubov has been practicing the full program for a long time. Whether she will have time to get in shape, it is difficult to say now. Let’s see, there is still time, so we just need to make every effort to do so. As for Tatiana, she also trains. In Germany, she was told that no restrictions are needed, but this situation must be handled most carefully. She hasn’t trained in a long period of time, so we do not force anything. I can say that Tanya was engaged in Italy, and on arrival in Novogorsk she is working fully with the team. I shall repeat, everything is fine, no one has any serious problems there.

– Do you already know something about the conditions in London – game hall, a covering of a platform, balls and other? Whether there can be with it any unexpected things?

– No, no information about it at this at present, but we are flying to London on Tuesday, so we will see for ourselves very soon. I am confident that everything will be organized at the highest level without any unpleasant surprises.

– Sum up the recent tournament in Italy?

– We had a very bad game with Turkish woman. The match with Italians was won with 3:2 but it was very hard. We lost the first set, losing in the second, but in the end the girls still managed to get together and turn the tide in the struggle.

– Why did you play so bad with Turkey?

– As you have noted, in London, you will have four days before the first match. That’s enough for you to get used to local conditions, atmosphere and weather?

–In London there will be no problems with acclimatization. I think this time will be enough to get used to other conditions. Yes, it’s cooler there than here, but all teams will be on an equal footing.

– What is the main feature of the Olympic tournament with a psychological point of view?

– This is the main event every four years, the peak for any athlete.

– Already planning your schedule during the Olympics? Will there be time for you to go to the games of other teams and cheer on their compatriots competing in other disciplines?

– We go there to play, not watch the matches. We are all very tightly painted- Trainings, games. I’m not sure there will be a lot of free time on anything other than that.

– Will you go to the opening ceremony?

– I do not think so, because it will be on the 27th at night, and already on the 28th is our first game.

– What are the main favorites to win?

– Favorites are the same as before – America, Brazil. Frankly, it makes no sense to allocate someone. Opponents are extremely serious and worthy.