Determination and power – his best weapons, coldness in the key moments – a thing to improve. The first goal is the Final Four of the Italian Cup, the dream of summer is called London. 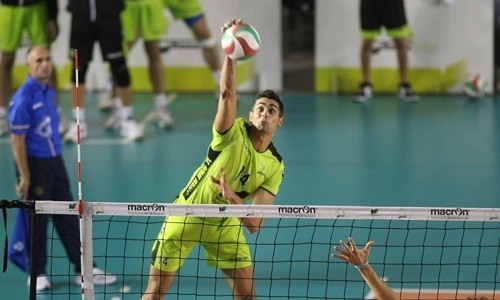 “I think I’m a player with determination and power but that has to improve much from the point of view of the concentration in key moments of the match. Only if I mature from this point of view, I can consider myself a volleyball player of value”. This is how sees himself Giulio Sabbi, a young opposite of M.Roma Volley with clear ideas and big desire to get to the top thanks to the experience in Roma and the shirt of the national team conquered last summer after an excellent season in Serie A2 with Geotec Isernia.

“I think that the season 2010-2011 has to be considered the starting point of my career. I spent a year in Sisley where I had been the reserve of a big champion like Fei. It doesn’t happen very often that a team put such trust in a young player, I won’t ever stop to thanking Isernia for giving me such a possibility”.

Then Sabbi goes on to speak about last season: “It was very important, I had a great personal growth and as an athlete, to confront every day with the players of the highest level allows you to improve continuously”.

Giulio shows his clear ideas for the future: “I must try to give continuity to my performance, a passage from A2 to A1 is not as simple as it might seems. With Roma I’d like to go as far as possible in play-offs and maybe center the Final Four of the Italian Cup that will take place here in Rome. Mathematically we have conquered the quarter finals and this is a good result, but to play the final phase at home, with a team that I dreamed to play with, for me it would be a success”.

About the national team he said: “Berruto was an author of a significant rejuvenation, there was a generational change that allowed several players like me to have an important chance for their careers. We worked hard, it was an intense summer, during which the group showed a compactness that allowed us to achieve optimal risults. We didn’t gain “a ticket” to London in Japan, but we will have other possibilities of which we will take advantage, we all want to go to the Olympics and to be heroes there too”.