Monika Potokar for WoV – “I won’t forget Italy, I would like to play there again”

Monika Potokar is currently playing in the Greek league, in AO Thiras. 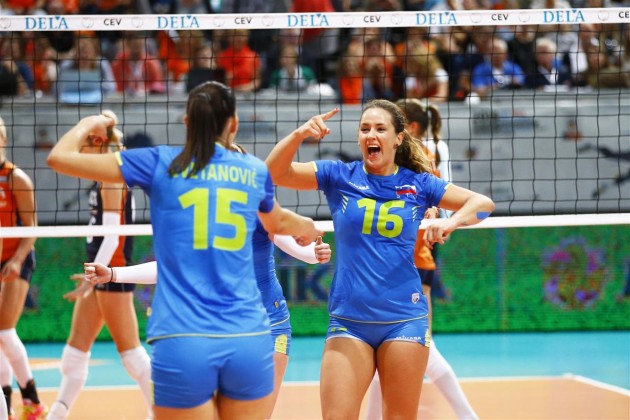 Her goal and a goal of her team is to join the playoff finals. Monika Potokar has also explained why the men’s team of Slovenia has a better result at the moment.

Let’s read about her volleyball experience.

This is your second season in Greece, how would you describe the quality of the Greek League?

“As you said, this is my second year competing in the Greek league. In 2016-2017 I played for Naxos and this season I play for AO Thiras in Santorini. During those two years, the level hasn’t changed that much, but I believe that the Greek league has good young players with the potential to do something better in the future to raise the level. I have to mention the team of Olympiacos which as you might know is one of the best teams even in Europe. Last year they played in the final of the Challenge Cup. It’s nice to compete against these kinds of teams that raise the level.”

Your team Thira is currently in the fourth place.  Is it possible to reach the playoff finals?

“Currently we are in the fourth place but our goal is to reach the playoff finals for sure.”

Since you played in Italy, France, Romania and now Greece, which league and country left the best impression on you?

“In Italy, the level, the organization, the way of practice and life, in general, was something that I will not forget and would love to do again. I will always remember my season in Romania because personally, it was one of my best seasons. We played Champions League and managed to win two games which was a big thing to do. We also got double, winning the national championship and national cup.”

What is your goal in the volleyball career?

“I want to continue playing in Europe at a high level. I haven’t reached my aspirations for volleyball yet so I want to keep playing volleyball and doing what I love as better as I can. I discuss and decide with my manager Tunc Afsar about my transfers.”

What do you think, why Slovenian men’s National team has better results in Europe than Women’s’ NT?

“The men’s team has a lot of good professionals that compete at a high level in many European leagues. I believe that they have more time to practice together, a better organization which does the work. I also think that the women’s team has a lot to give in the upcoming years. We have a bunch of young players with the potential to do something good on a national level and make Slovenia proud.”

How would you describe yourself in one sentence?

“Passionate, fighter, energetic, compassionate, always willing to help others. Out of all, my friends love the crazy part of me!”

How do you spend your free time in Greece?

“I am lucky to play in a well-organized team. I take advantage of my free time here in Santorini because there are a lot of interesting things to do. I enjoy my “freddo” espresso next to the view of Caldera, I drive through the island to discover new places, and I spent time with my hilarious teammates. Can’t forget to mention that I really enjoy a good movie!”  says Monika Potokar for WorldofVolley.

POL M: Łuczniczka player, who was caught using doping, chooses not to send B sample for testing